Vanessa Seward’s seventies-inspired style is easy to pigeonhole as Parisienne, but though she has lived in the city for three decades, the Buenos Aires-born designer spent much of her childhood in London. Now she has returned to open her own petite enclave in the wealthy yet bohemian neighbourhood of Notting Hill.

For this, her fifth store, Seward has once again enlisted Laurent Deroo Architecte who she first commissioned after seeing his work on the homes of her friends – including Victoire de Castellane, creative director of Dior Joaillerie  – as well as the APC stores which he has designed since 2000. ‘To have someone who I respect very much interpret my world is a wonderful privilege,’ says Seward. ‘I’ve always thought Laurent had amazing taste, quite masculine and clean which is a nice contrast to my clothes which are very feminine.’

Another important collaborator is Seward’s husband, the composer and producer Bertrand Burgalat who has created a playlist for the store. ‘It’s a bit quirky with a lot of different tracks, but they all have something to say about me. He knows me better than anyone.’ 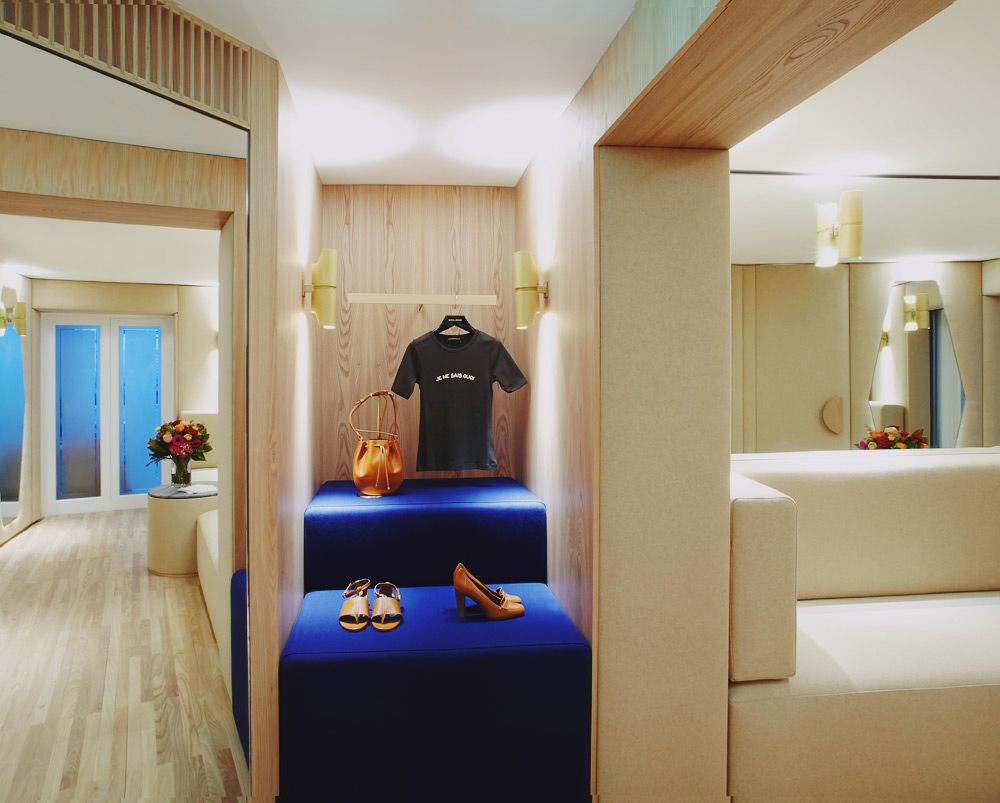 Seward’s signature bold midnight blue is used to accent an elegantly neutral interior: all Italian marble, sequoia stone and light timber. ‘Laurent has created codes which are identifiable: the deep dark blue, the gold railings. But I love the way that he adapts the concept to the city and to the place that he’s working on.’

In London that meant enhancing the intimacy of the space – lamps provide a flattering glow and a sense of atmosphere, while modular seating further incorporates Deroo’s codes for the brand. Panels of abstract aquamarine stained glass conceal an elm staircase leading down to two changing rooms nestled away for extra privacy. ‘All that area is kind-of padded, like a bubble of comfort. It’s nice to have a changing area away from the view of other customers,’ says Seward who learned the art of retail from her former boss, the couturier Loris Azzaro.

‘Sometimes one can feel a bit uncomfortable in certain luxury shops,’ says Seward. ‘I like real luxury, where everyone is considered the same. Where it’s warm and welcoming.’