Beneath the remains of the 19th century ‘palace’ that the Bavarian society portraitist Franz von Lenbach constructed for himself lies a concrete bunker linking what is now the Lenbachhaus museum to Munich’s metro system. It currently hosts an exhibition of sculpture and film by German pop artist Thomas Bayrle.

The gallery is filled with an array of internal combustion engines isolated from their original vehicles and stripped back to reveal their moving parts. They range in scale from a large radial propeller plane engine to those found in a Vespa scooter.

Titled ‘Monstranz’, the former takes its name the ornate ecclesiastical vessels used to display sacred artefacts. The noise of engines is accompanied by individual soundtracks that variously incorporate either religion or popular song. ‘Monstranz’ is accompanied by the faint sound of a rosary recital. The Vespa by Maria Callas singing O cieli azzurri from Giuseppe Verdi’s Aida. Elsewhere a high Catholic mass and Edith Piaf can be heard.

The cacophony appears to be conducted by pairs of disembodied windscreen wipers. One, attached to the wall, glides over a glazed Warhol portrait of Mao, accompanied by the Warhol-produced I’ll be your mirror from The Velvet Underground and Nico. Another free-standing set emits Erik Satie’s repetitive Musique d’Ameublement. The 79-year-old Bayrle has described works in this exhibition as being like ‘compressed cathedrals’ (in terms of their engineering) and drawn comparison between the rhythms of prayer and of machines. 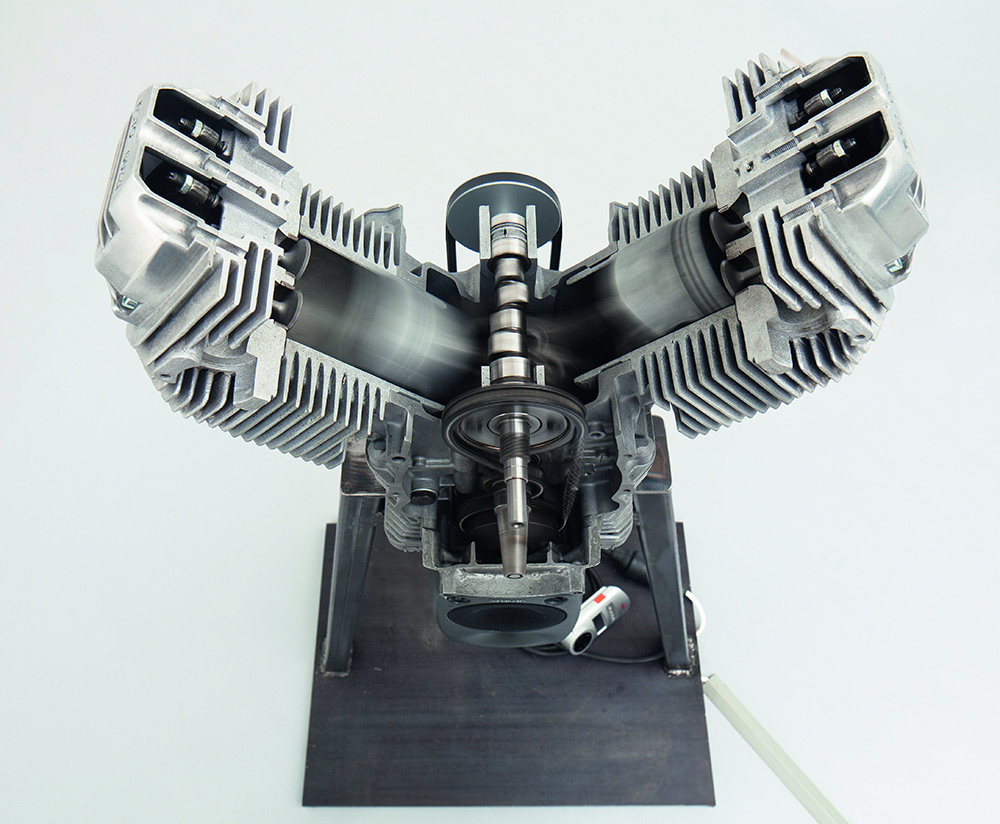 A series of stop motion animations echo the shuddering mechanisms. They explore fusions of the organic and industrial from pedestrianised precincts to cloned sheep. Elsewhere a 30m long grey, wooden relief mounted on the concrete walls pulls everything together. It depicts a stylised autobahn (a recurrent motif in Bayrle’s practice since the late 1970s) and echoes the plant systems of this cultural and transport hub.

The gallery is filled with an array of internal combustion engines (pictured, Big Block, 2012) isolated from their original vehicles...

...and stripped back to reveal their moving parts. Pictured, Hochamt, 2010

‘Thomas Bayrle’ is on view until 5 March. For more information, visit the Lenbachhaus website