Artists Ben Langlands and Nikki Bell grew up commuting on the Tube. So the London-based duo were well placed to pay homage to London Underground visionary, Frank Pick, 75 years after his death, for an Art on the Underground commission at the newly refurbished Piccadilly Circus station.

’We were given free reign of the Transport Museum archives in Acton,’ Langlands explained prior to the public artwork’s unveiling. ’We went through Pick’s personal papers, and stumbled across a beautiful equation scrawled in the margins. Two columns of four words, each connected by backwards arrows: Beauty, Immortality, Utility, Perfection. Goodness, Righteousness, Truth, Wisdom.’

He adds, ’As soon as we saw this little note, no more than a doodle, we knew that Pick was a true pioneer; somebody who really knew that changing your surroundings can change your life.’ Pick’s eight, almost forgotten words form the basis of the new commission. Unveiled today, it stands on the arching outer wall of Piccadilly Circus, where astute commuters will remember a bank of now obsolete phone boxes once stood. 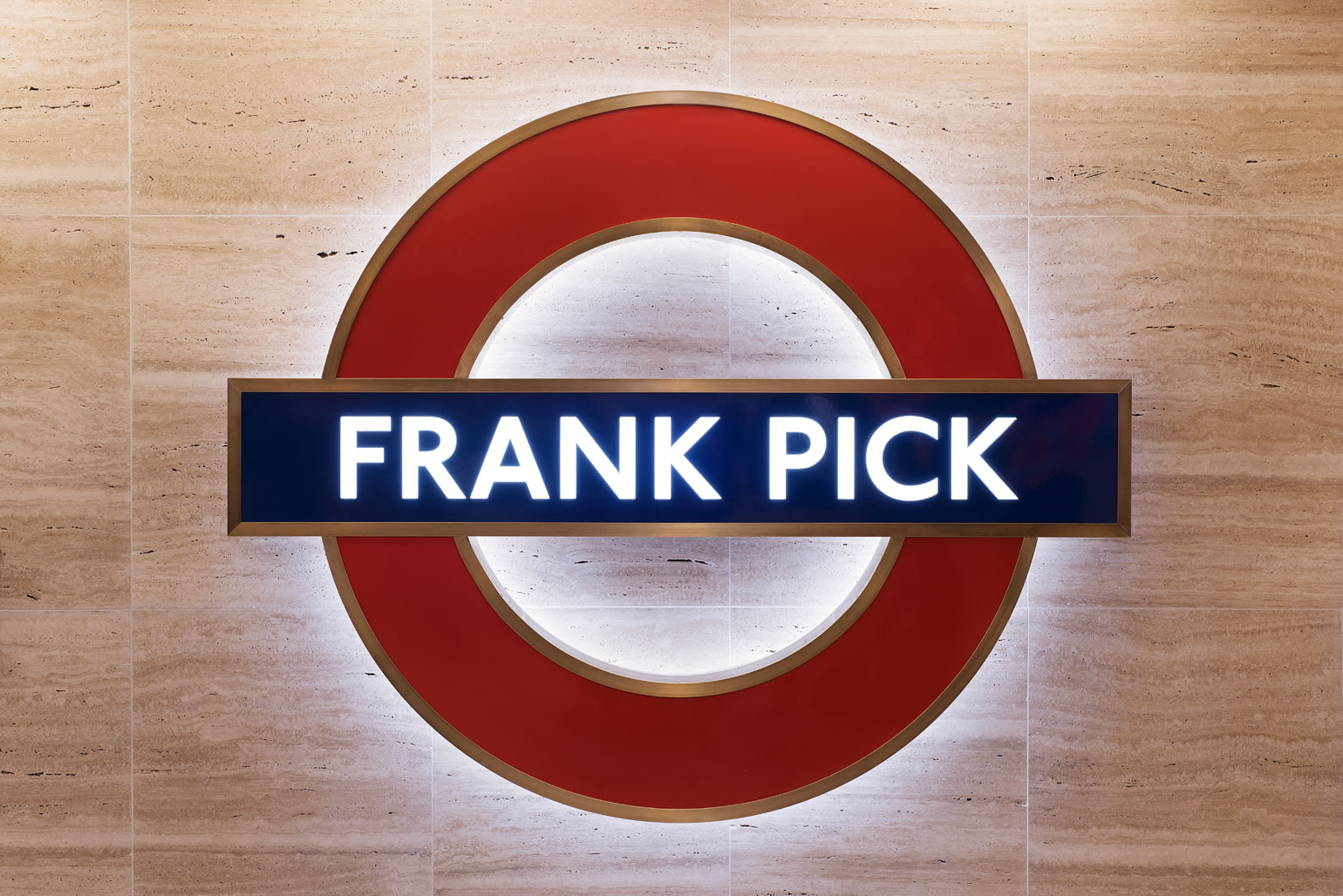 A station roundel has been updated in homage to its designer, Frank Pick. Photography: Thierry Bal

Pick, a solicitor turned transport administrator, turned design buff, had a knack for knowing how talented creative practitioners (Harry Beck, Edward Johnston, Charles Holden, Man Ray) could best serve the city. Be it through the 1931 tube map design, building new stations, or revolutionising transport branding. Langlands & Bell celebrate this pioneering design acumen by using two renowned symbols Pick was instrumental in bringing to fruition: the Johnstons Typeface which he commissioned in 1913, and the reworked roundel which followed in 1917. The 2m high bronze letters – a new material for Langlands & Bell – are appended by the iconic roundel with ’Frank Pick’ proudly stamped inside.

The project has taken about a year, although the wheels were set in motion four years ago, when the former Turner Prize nominees were first approached by the London Transport Museum. ’We could immediately identify with the whole context of the project’, Langlands explains. ’Piccadilly Circus is the heart of the city - the site is iconic. But it was Pick’s intuitive idealism that was most important to us.’ The more the duo researched, the more they uncovered about the man the London Transport Museum is calling ’a forgotten hero’. As with many exceptional people, there was an air of loneliness around him. Langlands explains, ’He was a quiet guy. Socially awkward. Some people found him arrogant – but he was bright and brilliant. With our installation, we’re giving Pick his words back.’

Langlands & Bell discovered that Pick had hastily jotted down the eight-word mantra as he waited to deliver a speech as London Underground’s first chief executive, a position he found himself in ’almost by accident’, with no formal transport training, and no background in design. Perhaps the hurried scrawling was nothing more than a pre-speech pep talk to himself, never intended to be seen by anyone else. Perhaps it was more than that – a powerful personal philosophy, that we can all learn from on our morning commute, from the man who had the foresight to intertwine London’s infrastructure with design.

When Pick was given responsibility for London Underground’s publicity in 1908, he recognised the potential of graphic posters and commissioned artists to reinvent TfL’s corporate identity. Pictured left, Shop between 10 and 4, by Edward McKnight Kauffer, 1947. Right, Thanks to the Underground, by Zero (Hans Schleger), 1935. Courtesy of TFL and the London Transport Museum

Built in 1935, the Arnos Grove Underground station on the Piccadilly line was designed by architect Charles Holden under the direction of Pick. Courtesy of TFL and the London Transport Museum

Pick at his desk, 1939. Courtesy of TFL and the London Transport Museum

Beauty < Immortality is on view at Piccadilly Circus station. For more information, visit the Art on the Underground website