Think of Ivan Moscovich’s harmonograms as the work of a Spirograph toy on an acid trip – elegantly swirling, myriad-coloured ink pens driven by the gravity and precision mathematics of a Heath Robinson-esque analogue computer, conspiring to create beautifully nerdy, sci-fi vectors, azimuths and ellipses.

Moscovich’s creations caused quite a stir when they first appeared as key exhibits at the milestone ’Cybernetic Serendipity’ exhibition at London’s ICA in 1968. The world-renowned author, artist and award-winning designer of teaching aids and puzzles had invented and patented the ’Harmonograph of Moscovich’, a pens and pendulums machine which could generate infinite graphic configurations via the magic of kinetic technology. As a theory it all sounds rather geeky. On paper, Moscovich’s art is a bonafide modernist’s delight. 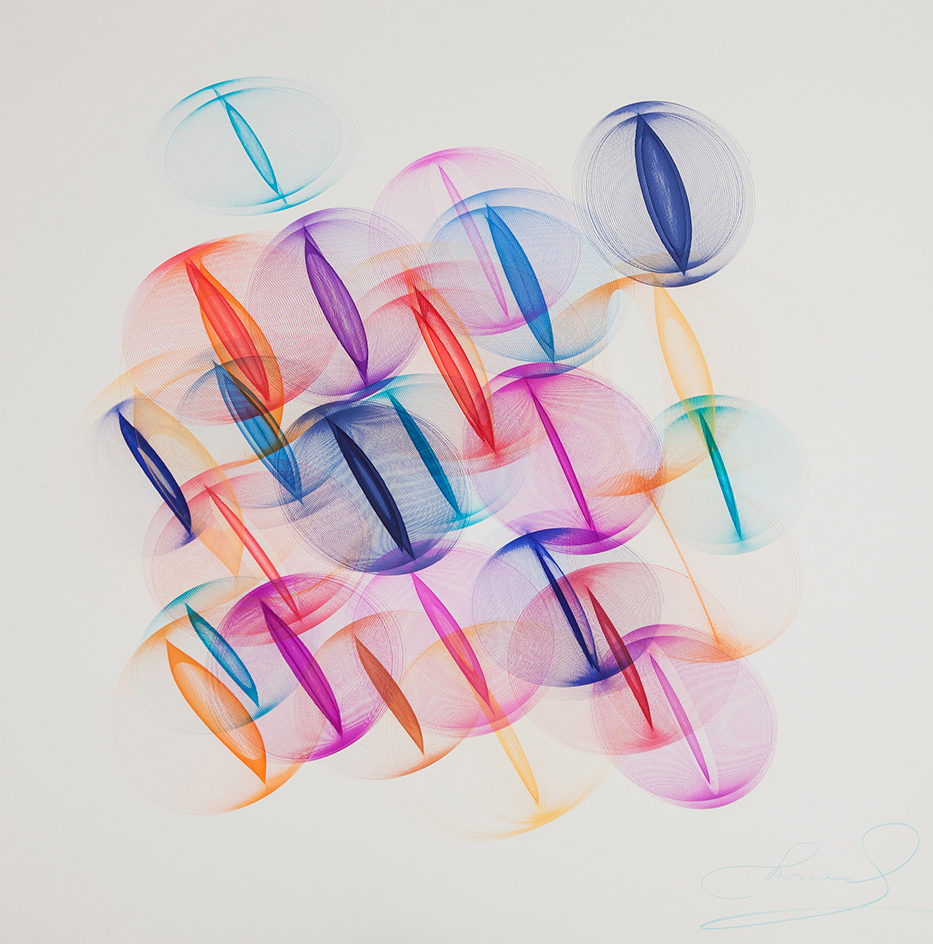 Almost 50 years after they first went on show in the capital, London-based art and antiques dealer Henry Saywell is bringing ’Harmonograms of Moscovich’ back to town with an exhibition at The Hospital club in Covent Garden.

Now 90 years old and based in San Francisco, Moscovich himself was in attendance at the preview. And he has quite a story to tell. Born to Hungarian parents in the former Yugoslavia, Moscovich lived through the Novi Sad Razzia massacre of World War II, narrowly escaping mass execution at the riverbed of the Danube and then went on to survive Auschwitz and Bergen-Belsen.

Following a death march, he spent his final night concealed in among corpses before being liberated by the British Army. After the war, he became the founder, creator, and later Director of the Museum of Science and Technology in Tel Aviv. Moscovich went on to explore his passion for science, writing, inventing, creating brain games, mentally stimulating toys and mind-boggling puzzles. His one-man-machine shows have been displayed at the Berlin Museum of Modern Art, Basel’s Didacta exhibition and the Science Museum Tel Aviv.