The beasts within: artists tap into their wild sides for a roaring show

’Animality: A Fairy Story by Jens Hoffman’ brings bark as well as bite to Marian Goodman Gallery in London

Rarely before have we seen such a long and varied list of contributors, as we do in Marian Goodman Gallery’s group show ’Animality’. The ’cast of creatures’ ranges from dogs, camels, fish to octopi, and charts a history from George Orwell to Gabriel Orozco by way of Marcel Broodthaers. Curator Jens Hoffmann, never one to turn down a challenge, has outdone himself with this wild, two-floor adventure.

Subtitled ’A Fairytale by Jens Hoffmann’, the exhibition transforms Marian Goodman’s bright white space into a colourful – and noisy – zoo. The packed press preview certainly helped with the latter. Culture vultures circled and swooped to their hearts content. Though it must be said, the space feels less like a caged, organised zoo, and more like jungle – where weird and wonderful creatures roam free, decontexualised, to brilliant effect. 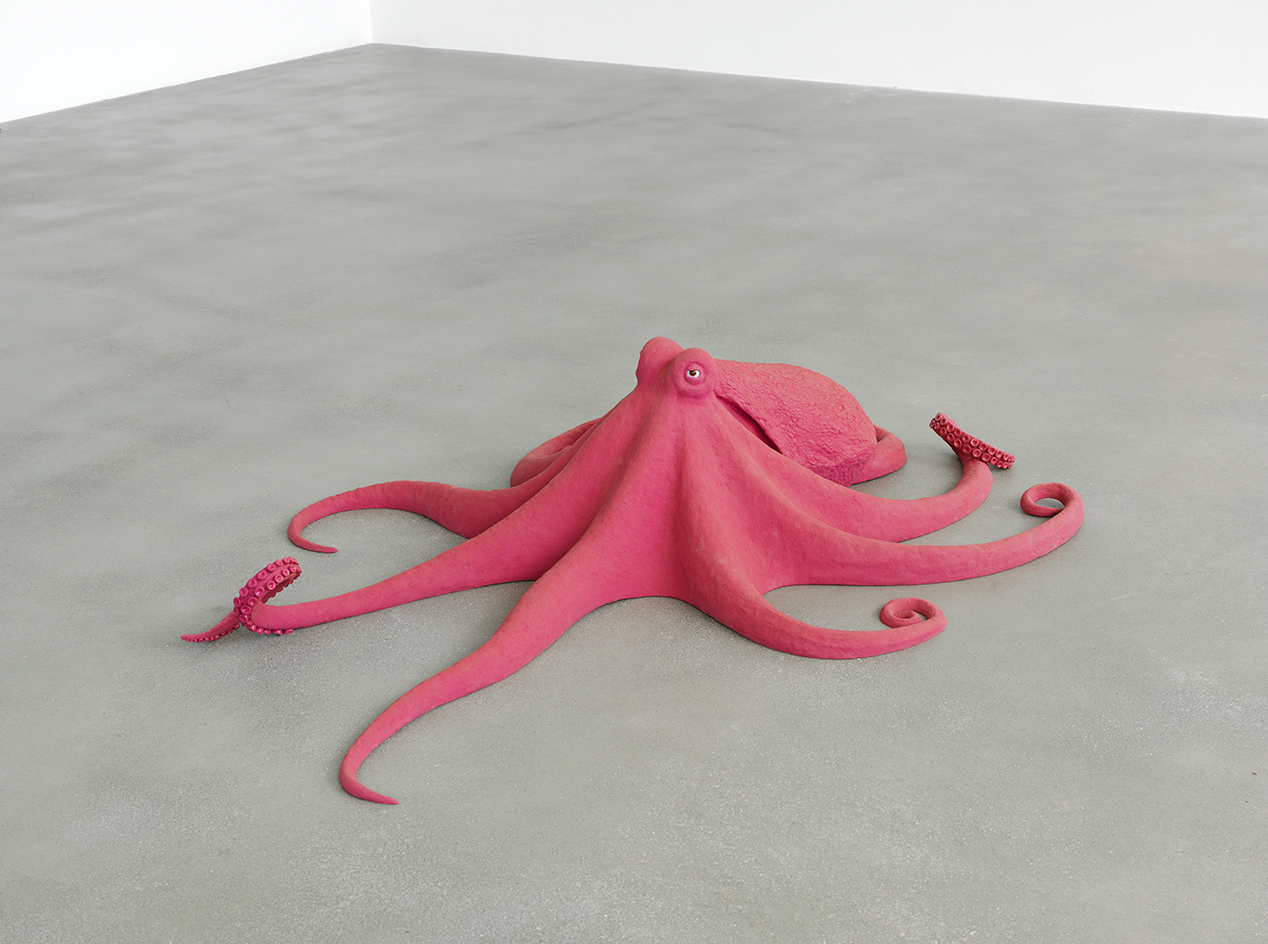 It sounds chaotic, but thanks to Hoffmann’s sensitivity and coherent vision, it somehow ties together without trouble. The curator left his post as deputy director at New York’s Jewish Museum in March with the intention of working with exhibitions in a more hands-on way. Here, he seems to let loose his pent-up creativity. ’Jens is not afraid to think big and has no shortage of creative ideas,’ explains Courtney Plummer, director of Marian Goodman Gallery. ’He is very conscientious about contextualising the work and making sure there are layers of content and perspectives from which to consider.’ 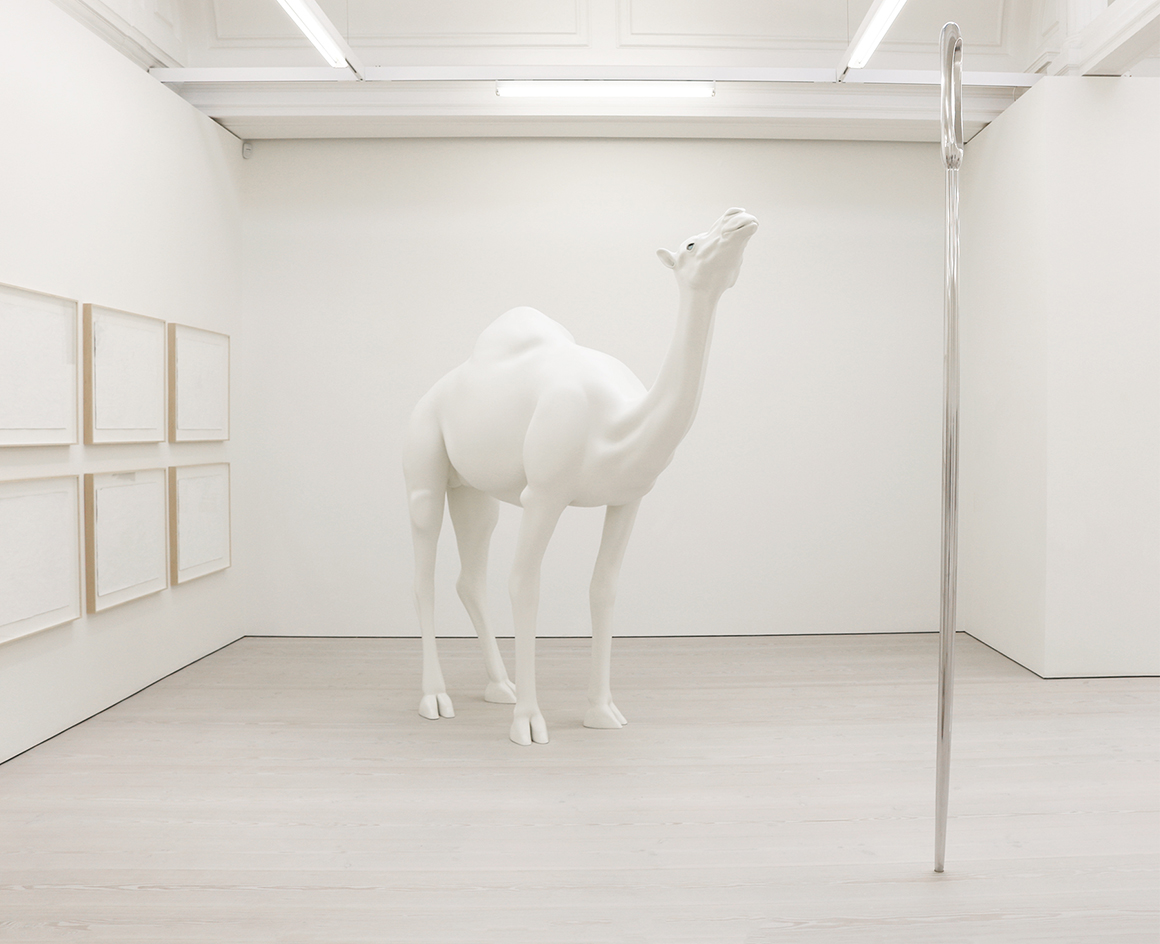 From left, ’Silverback self portrait with prominent belly, trying to remember how to use my opposable thumb in indelible, diverse and kinky ways’ by Abraham Cruzvillegas, 2016; and ’Camel (Albino) Contemporary Needle (Large)’ by John Baldessari, 2013

Upstairs, John Baldessari’s imposing albino camel (above) deservedly takes centre stage. It remains humorously surprising, no matter how many times you’ve seen it in the white-bone flesh. Abraham Cruzvillegas’ glossy ink and acrylic paintings, created earlier this year, are another marked highlight. Touching upon Hoffmann’s more serious theme of animals edging into extinction, Cruzvillegas paints a series of silverback gorillas, each ever more gently than the last, fading into obscurity, so the final portrait is difficult to make out.

Plummer tells us that this exhibition has taken about a year to pull together. It’s not surprising – with over 70 works to peruse ’Animality’ is an overwhelming feat, aided by the range of artistic mediums on display (photography, film, sculpture, historical artefact, painting, installation). This adds to the sheer, confusing joy of it. With rules being continuously rewritten in the human political realm of late, it seems apt that Hoffman rewrites the rules of the animal kingdom too, where peacocks perform happily aside keen-eyed tigers, and octopi line the floors, ready to trip ill-prepared humans up.

Goat in Purple Bag by Gabriel Orozco, 2016. Courtesy of the artist and Marian Goodman Gallery

There are over 70 artists on display in the group exhibition

The Most Beautiful of All Mothers (XVI) by Adrián Villar, 2015. Courtesy of the artist

The staged animal kingdom is a satire on real life events

’Animality’ is on view until 17 December. For more information, visit the Marian Goodman Gallery website