On the rocks: Omar Gandhi designs a new house for the Canadian countryside

Bounded by rocky terrain, a hilltop clearing presiding over the landscape provides the perfect setting for Float House by Halifax architect Omar Gandhi

In Nova Scotia, bold architecture tends to cluster along the water. The Atlantic Ocean, which long provided sustenance for this region of Canada, now offers a wealth of views. A new project by the Halifax architect Omar Gandhi, dubbed Float House, takes another point of view, finding the sublime in a rough corner of the landscape and reflecting it back in a set of stunning sculptural forms. 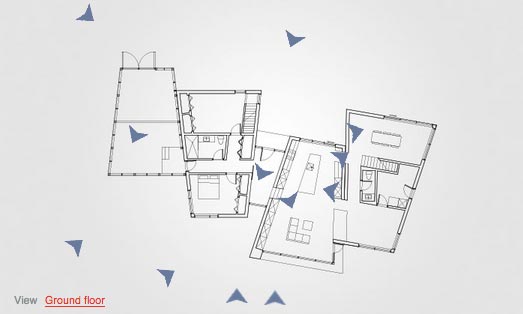 The 232 sq m building is located ’off the beaten path,’ Gandhi says - half a kilometre inland, in a jagged zone of glacial hills and valleys. Gandhi helped the client Dr. Melanie Kelly select the site, a hilltop clearing which is bracketed by a brawny outcrop of rock. That natural form ’is the most miraculous thing,’ Gandhi recalls. ’It seemed the perfect anchor for a house.’

Where local architects often draw on the vernacular tradition of maritime wooden sheds, Gandhi’s office has twisted this into an unfamiliar shape: the house is a string of four wood-clad forms, but they have been rotated and eroded at the top edges to form jagged, boulder-like volumes. (The word ’float’ is a geological term for loose pieces of rock.)  At one end are Dr. Kelly’s living, dining and bedroom areas; in the middle, two guest bedrooms which houses visits from her grown children; and at the other end, a garage wrapped in a screen of pale spruce siding. This wood, black aluminum windows and a grey metal roof complete the material palette, which blends closely with the topography.

And yet the house - built inexpensively by local contractors - is rich with different spatial experiences. The dining area comes within a few metres of a sheer rock face, which is revealed through large windows. Steps away, the living room looks out over a series of lakes - and the ocean, seen from an angle off in the distance.

A play on the vernacular tradition of maritime sheds, four timber clad elements are rotated and manipulared to form jagged boulder-like volumes

Metres from a sheer rock face, the glazed walls of the dining room give the impression of being immersed in the landscape

Dubbed Float House due to the geographical term ’float’ meaning loose pieces of rock, the sculptural volumes were conceived as a reflection of the sublime natural surroundings

Sensitive to the topography, the volumes are clad in pale spruce with black aluminium glazing and grey metal roofing

High level clerestory glazing encourages daylight into to the bright and spacious interior, with sloping ceilings framing the view

On plan, a volume containing two guest bedrooms is flanked by the house’s living, dining and bedroom areas, and the pale spruce-clad garage

Inside out – views of rocks, lakes and the ocean are captured in picture perfect frames