Home comforts: a new Irish house extension with a twist

A new offering by the Zurich based architecture practice Markus Schietsch, this house extension is located in Ireland

The rolling hills of Ireland’s County Cork has a bold new intervention courtesy of the Swiss. Tacked onto an unassuming cottage is an extension that overcomes and positively takes advantage of the topography. It’s the work of Zurich firm Markus Schietsch Architekten, and was commissioned by a member of the founder’s family.

Ireland is peppered with small houses, often built on family-owned farmland, that have evolved over the years with a series of add-ons. ’In Ireland it is normal to build new houses next to the old ones,’ says Markus Schietsch, ’The old houses get abandoned and function as stables, stone pits or just become ruins.’ This house on the outskirts of the village Inchigeelagh was last expanded in the 1990s. But while the Irish are used to seeing all manner of architectural forms and tastes amalgamated on a single plot, Schietsch’s design has significant stand-out. 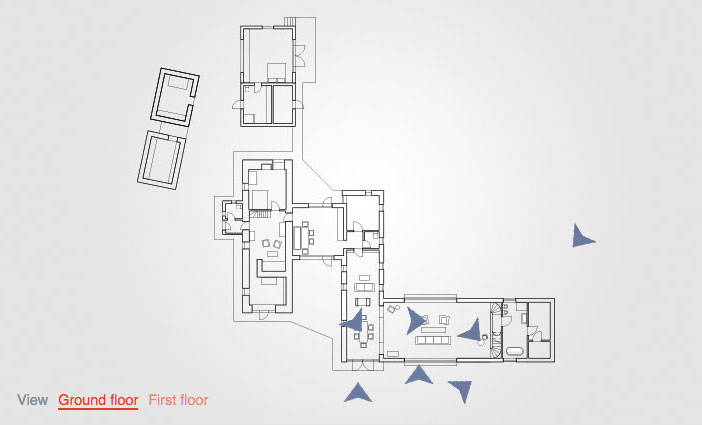 Take an interactive tour of House in Inchigeelagh

The extension, which is no higher than the chimney of the existing property, travels from the main house along the flat ground and then curves up into what the architects call ’an expressive sculpture’.

The architects pulled off this feat by borrowing from boat-building techniques. ’A wooden rib structure was erected, onto which multiple layers of plywood were applied.’ Schietsch explains. To add to the hull or funnel reference, the structure was covered with a slate-grey coating of liquid plastic.

The upshot is fabulous views of the wild countryside from the upper storey master bedroom, and a house embedded  ’even more strongly into the surrounding area,’ adds Schietsch, whose firm completed another intriguing roof design in the summer of 2014 at Zurich Zoo’s Elephant House. As well as the master bedroom, the 150 m sq extension houses a partially-subterranean bathroom and large living space the width of the structure, which has large glazed sliding doors on either side.

Tacked onto an unassuming cottage, the extension has a twist - it sculpturally curves up, off the ground, to take advantage of the topography

This existing house on the outskirts of the village Inchigeelagh was last expanded in the 1990s, before Schietsch’s team was called upon

A slate-grey coating of liquid plastic covers the structure externally, which is contrasted by clean white interiors inside

The structure is wonderfully embedded in the countryside; its large openings help towards that, offering long vistas

"A wooden rib structure was erected, onto which multiple layers of plywood were applied." Schietsch explains, referring to the construction method used

The ground floor houses living areas, while the master bedroom was placed at the top level

For more information on the architects visit the website