Maison Rebetez, a historic home in Coppet, Switzerland, dating back to 1936, has been given a modern and minimal overhaul, courtesy of local architecture firm Lacroix Chessex. When the owner’s offspring grew older and left the home, she soon became tired of the overwhelming amount of space in her now ‘empty nest’ and quickly enlisted the architects for a makeover. The plan was to update Maison Rebetez’s shell and rethink its interior program as two units, with the intention of renting one out.

The home’s external reimagining set out to improve the property’s energy saving credentials. Large ‘wings’ were attached to the north and south facades to create a pair of shaded terraces. These overhanging, domed eaves were carefully designed to help provide light during both summer and winter months, while at the same time protecting the interiors from excessive heat. 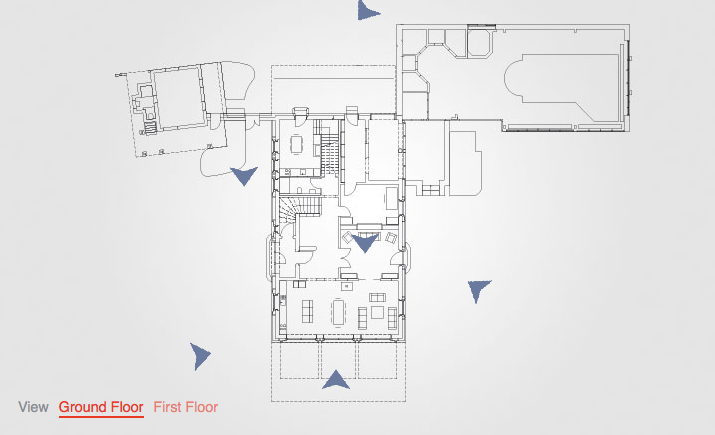 Clad in horizontally arranged planks of grey fir – selected for its warm aesthetic as well as its practical purposes – the solid shell encased the home in 350 sq m of added insulation.

Inside, the biggest intervention was the division of the home into two separate duplexes: the owner’s portion includes three generous bedrooms, accompanied by two bathrooms and a living room, with an adjacent open plan kitchen, library, office and an artist studio. The new, separate home – which will be rented out – contains two bedrooms, one bathroom, a living room and its own self-contained kitchen.

The two units work seamlessly together within Maison Rebetez’s well-thought out modern shell, which impressively sits in complete harmony with its reworked interior, showcasing Lacroix Chessex’s ability to envision a beautiful home that delicately balances old and new.

Large ’wings’ were attached to the north and the south facades, creating a pair of sheltered terraces

Fir wood was chosen for the cladding, due to the material’s soft, warm aesthetic and for its ability to act as a ’solid shell’, which would enhance the property’s new insulation

Maison Rebetez’s interior has been split into two separate duplexes, with the intention of renting one, while the owners live in the other

This part of the house also includes a library, office and an artist studio