Back in 1997, Wallpaper* ran a story delighting in the hard edges and raw concrete cantilevers of Flaine, the ski resort in the French Alps designed by Bauhaus architect Marcel Breuer in 1969. It was awarded 20th Century Architectural Heritage status by France’s Ministry of Culture in 2008 and, more recently, given a subtle makeover, its Terminal Neige Totem hotel spruced up with period-sensitive, 20th century furniture.

Now, almost 50 years since Breuer’s vertiginous grand design was first unveiled, its reputation as the world’s only architecturally noteworthy winter sports town is enjoying a credible challenge, from Laax, in Mulania Valley, Switzerland. 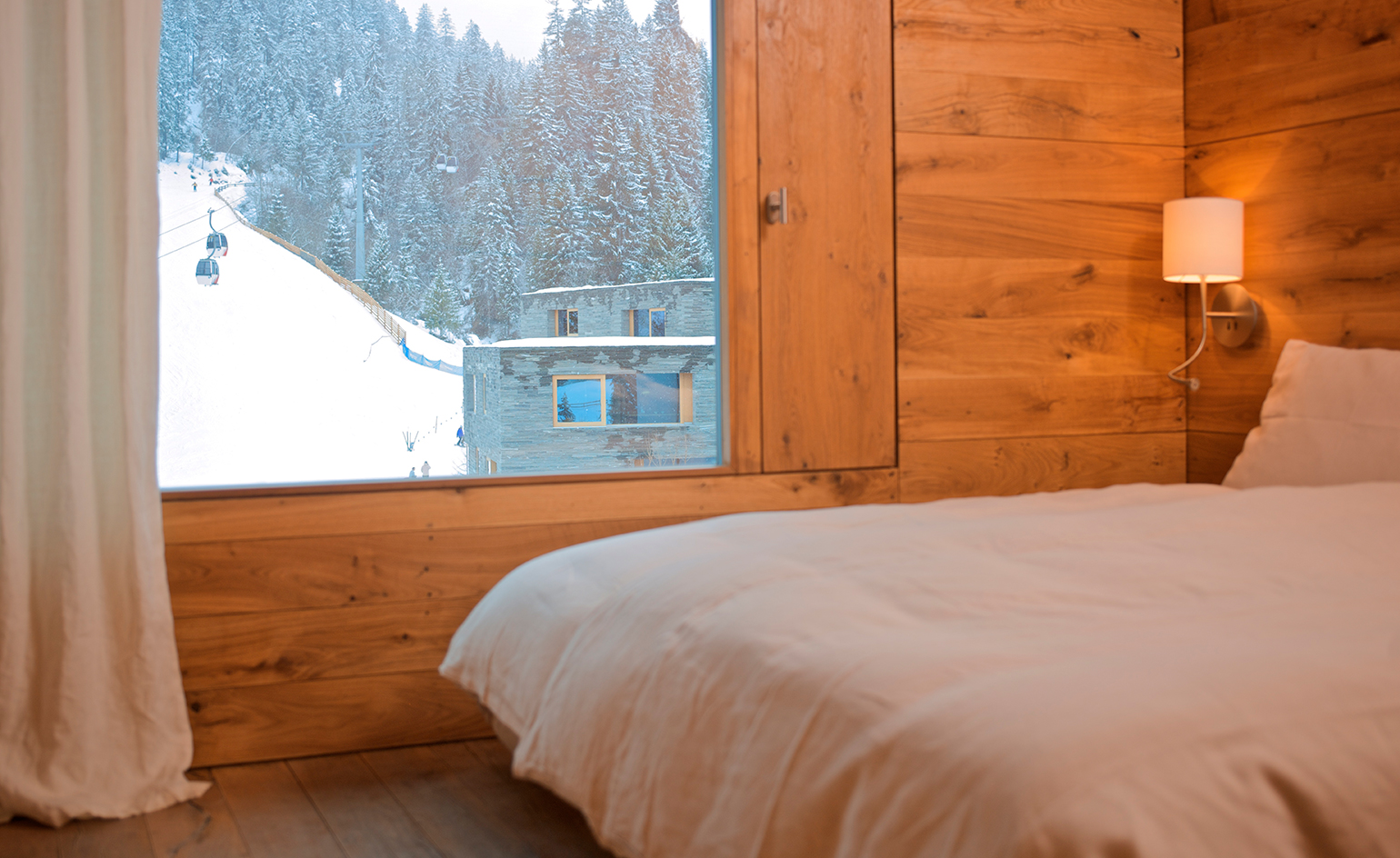 A double suite at Rockresort

With Reto Gurtner, president of the resort’s management board, in charge of an ambitious development plan, Laax continues to move onwards and upwards. Four snow parks include the largest half pipe in Europe, while two new cableways have been added to the mountain network – Treis Palas-Crap Masegn and Plaun Lavadinas-Fuorcla Sura, designed by Porsche Design Studio and featuring solar panel-heated seats that automatically swing 45 degrees against the direction of travel. Riders Palace is Laax’s answer to the Ibiza Rocks hotel concept: decent, basic, well-designed and affordable accommodation for young people who want to ski and party hard. And a short walk from Laax’s hipster village action is the CHF70m (€66m) Peaks Place apartment complex, designed by Beat Oberhänsli Architektur of Bottighofen and Kalfopoulos Architekten of Zurich. Having competed its final phase of construction in summer 2016, Peaks Place is the kind of coolly considered, premier condominium complex you’d expect to find in Aspen or Verbier. 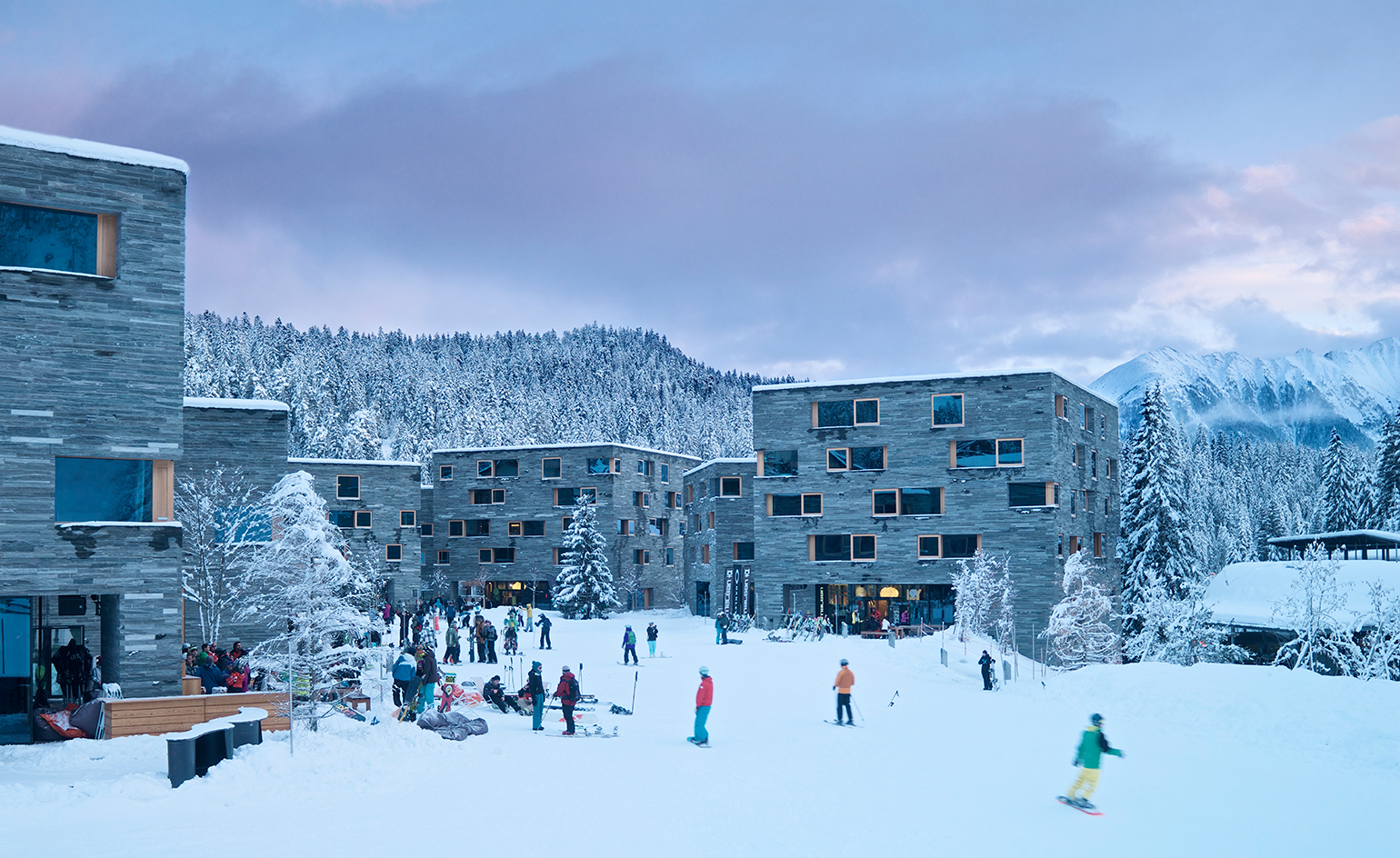 For the last few years, Laax’s objectives have also extended to a green initiative, with a view to eventual energy self-sufficiency. Rocksresort properties are fossil fuels-free, heated with a state-of-the-art, woodchip-burning system. Piste bashers have hybrid engines, while electric car drivers can find charging stations all over town. Solar panels and excess warmth generated by the lift engines heat the village’s restaurants, and plans are afoot for a neighbouring wind farm powerful enough to juice up more than 5,000 Laax properties. Innovations include a room key card that double as your lift ticket. This means no queuing for ski passes, because the card’s embedded radio transmitter automatically opens the turnstile gate and your account is charged accordingly. If the weather is fine, lifts open at 7.30am for sunrise skiing.

Laax generates smiles and wins awards – Switzerland’s Best Ski Resort, four times in a row, at the prestigious World Ski Awards – because it works so beautifully, rails against the notion of winter sports as an elitist activity, and because the modern, rock-block buildings at its heart are so Ex Machina movie-handsome. ‘And when it’s wet and dark,’ says Gurtner, ‘the Rocksresort’s 40 million-year-old stone sparkles like diamonds.’

A bathroom within a Rockresort apartment