Peter Marino’s new art-gallery inspired store for Louis Vuitton was inspired by the artistic heritage of its location in Soho, New York

In his Phaidon-published tome Art Architecture released earlier this year, starchitect Peter Marino explored the relationship between the design of his majestic retail spaces and the site-specific artwork he commissions for each interior. In his new vision for Louis Vuitton’s 11,000 sq ft store in Soho, New York, which opened originally in 1998, Marino has looked to the art-focused heritage of the neighbourhood, envisioning its new interior as a gallery-inspired space.

‘Soho’s identity as an arts district with studios and galleries was central to the development of the store design,’ explains Marino, whose spectacular designs for Louis Vuitton span London, Hong Kong, Singapore, Shanghai, Paris and Rome. In its New Bond Street maison, conceived by Marino in 2010, the scarf area of the store was imagined as a gallery, with individual scarves framed like works of art. The minimalist interior of the new Soho space features gallery-like track lighting, and high-tech and hand-painted fixtures. Twisted aluminium carbon fiber shelves offset tall pillars, decorated with abstract symbols by the Japanese artist Mukai Shuji. 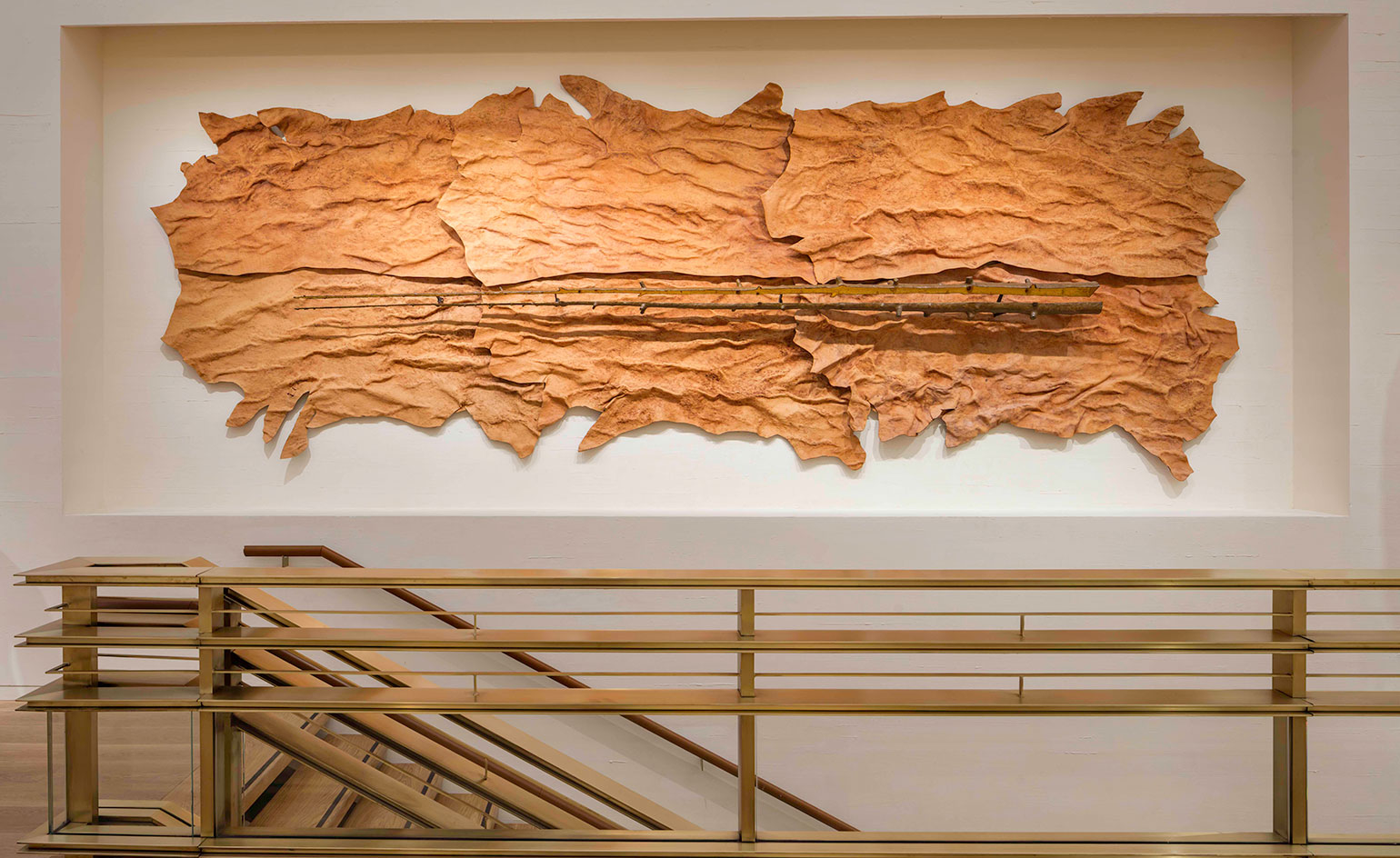 The store also houses a moulded leather and bronze installation by Giuseppi Penone, which complementes the rugged petrified wood and leather fixtures

The black and white installation took three people one week to paint, with the wall being angled to ensure that the columns are the focal point of the space. Their markings echo both the iconic Louis Vuitton monogram, and its chequered Damier Azur pattern. ‘If you visit the Louis Vuitton museum in Asnières, France, you learn that its monogram came from 19th century Japonism graphics,’ Marino explains.

A moulded leather and bronze installation by the Italian artist Giuseppe Penone hangs in an adjoining room. ‘I saw his show at the Palace of Versailles,’ Marino says. ’I was struck by Penone’s earthy use of leather and wood in such a glamorous and obviously French setting. I found the contrast cool, and the equivalent of carrying a Louis Vuitton handbag while visiting the great French monuments.’

Pieces from Louis Vuitton’s Objets Nomades furniture collection, created by leading designers, are also dotted about the space, which houses women’s and men’s ready-to-wear, leather goods, shoes, accessories, watches, jewellery and fragrance. The bright purple and orange leathers of Raw Edge’s concertina chairs enhance the vibrant hues in the women’s Resort 2017 collection, while the rugged rope detail of the Campana brothers’ hanging cocoon chair complements the store’s petrified wood and stone fixtures. These work to integrate the original architecture of the space, like timber flooring and a tin ceiling.