Until mid-November, those passing the Hermès boutique at 691 Madison Avenue will be treated to a host of wooden carvings of the label’s iconic ’Carrés’ scarves. Created by contemporary Dutch artist Levi van Veluw as part of the French house’s ongoing artist display series Vitrine D’Artiste, the autumn windows celebrate the launch of the brand’s theme for this year: ’Nature at Full Gallop’.

This latest installment sees van Veluw explore the connection between order and chaos, while paying homage to the brand’s equestrian tradition and exquisite craftsmanship. Finely carved wooden grids, filigree, geometric shapes and wooden veneers come together to form intricately-crafted ‘worlds’ – three-dimensional interpretations of Hermès’ signature silk scarf. ‘The scarf is timeless and possesses many of the elements and themes I work with,’ says van Veluw. ‘It was logical to use these for inspiration. I created my own patterns and shapes to make very sophisticated layered windows.’ 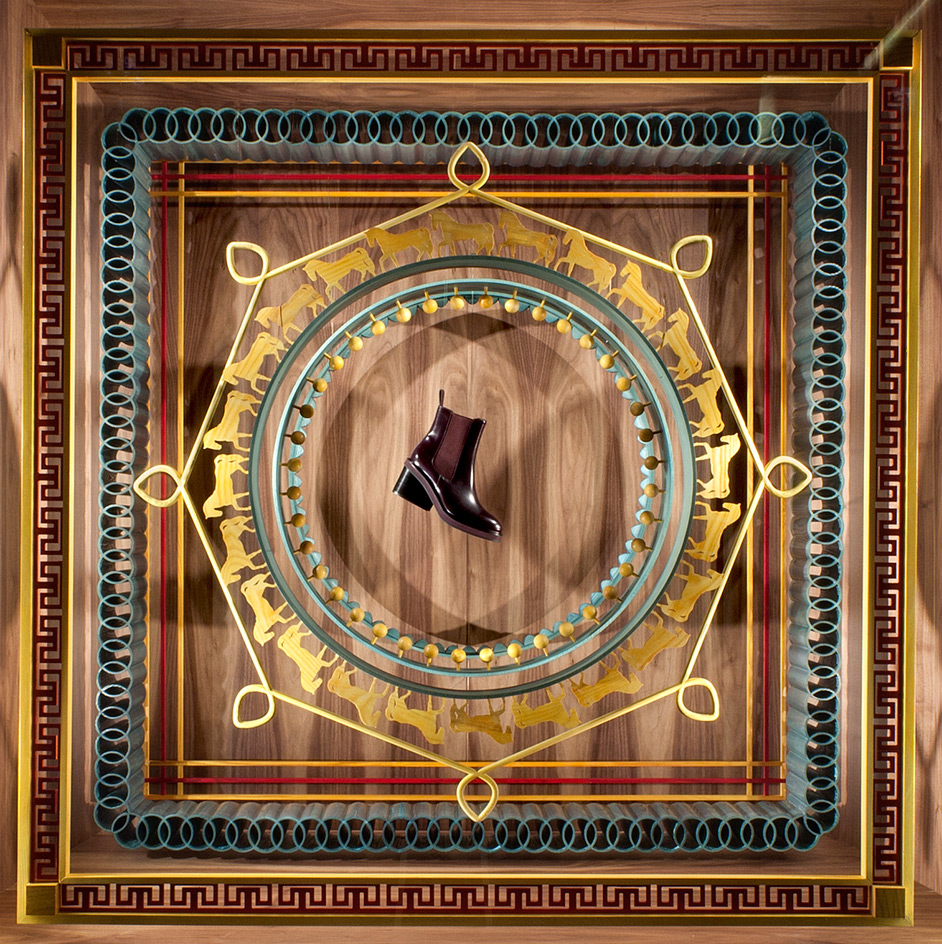 An Hermès boot emerges from the carving in one window

Upon closer inspection of the kaleidoscopic windows, Hermès’ trademark leather accessories – along with its newly-launched women’s fragrance, Galop d’Hermès – emerge among the designs. The harmony between artwork and product was precisely the intention behind the windows. ‘My ambition was to make artworks that fully integrate the products – they really had to be part of it. I approached the products as shapes and materials and transformed them into an abstract installation,’ says van Veluw, whose personal work often features a combination of grids and geometrical shapes – elements that are instantly recognisable in the Madison Avenue boutique’s window displays.

It’s this shared vision and focus on craftsmanship that has seen the collaboration between the luxury house and the contemporary artist continue into its second iteration. Says van Veluw on how he thinks his work relates to the brand’s iconic imagery: ‘I think the Hermès aesthetic results in how they approach the products. They take their craft extremely seriously – everything has to be perfect.’

Part of the Vitrine D’Artiste window series, the designs celebrate the launch of the brand’s theme for this year: ’Nature at Full Gallop’

Hermès’ distinct leather accessories are featured in the carvings

Levi van Veluw’s windows will be on display until 19 November. For more information, visit the Hermès website