Acne Studios’ Jonny Johansson is sat at the back of the vast amphitheatre inside the Faculté de Pharmacie of Paris Descartes University. He’s deep in thought. Georges Papazoff, a teacher of art history, is in the middle of delivering a four-part lecture, which explores the connection between self-portraiture and the selfie. But Johansson hasn’t gone back to college; the lecture is part of his brand’s A/W 2017 menswear presentation.

‘This is a bit of a statement for me to do this,’ Johansson says. ‘I felt a panic last season because everybody is doing so much and I wanted to slow things down. This is about trying to give something that’s not loud.’ Using images from Ai Weiwei and Velázquez to Lucian Freud and Yves Klein, Papazoff explains that pictures, photographs and images deal with human thinking. And so too does fashion.

Johansson had been in conversation about this staging for almost a year with lighting designer and show producer Thierry Dreyfus. ‘Jonny and I always think about how can we bring humour into the presentation,’ Dreyfus said backstage. ‘How can we bring something nearer to the people and for us to not be seen but still evident?’ 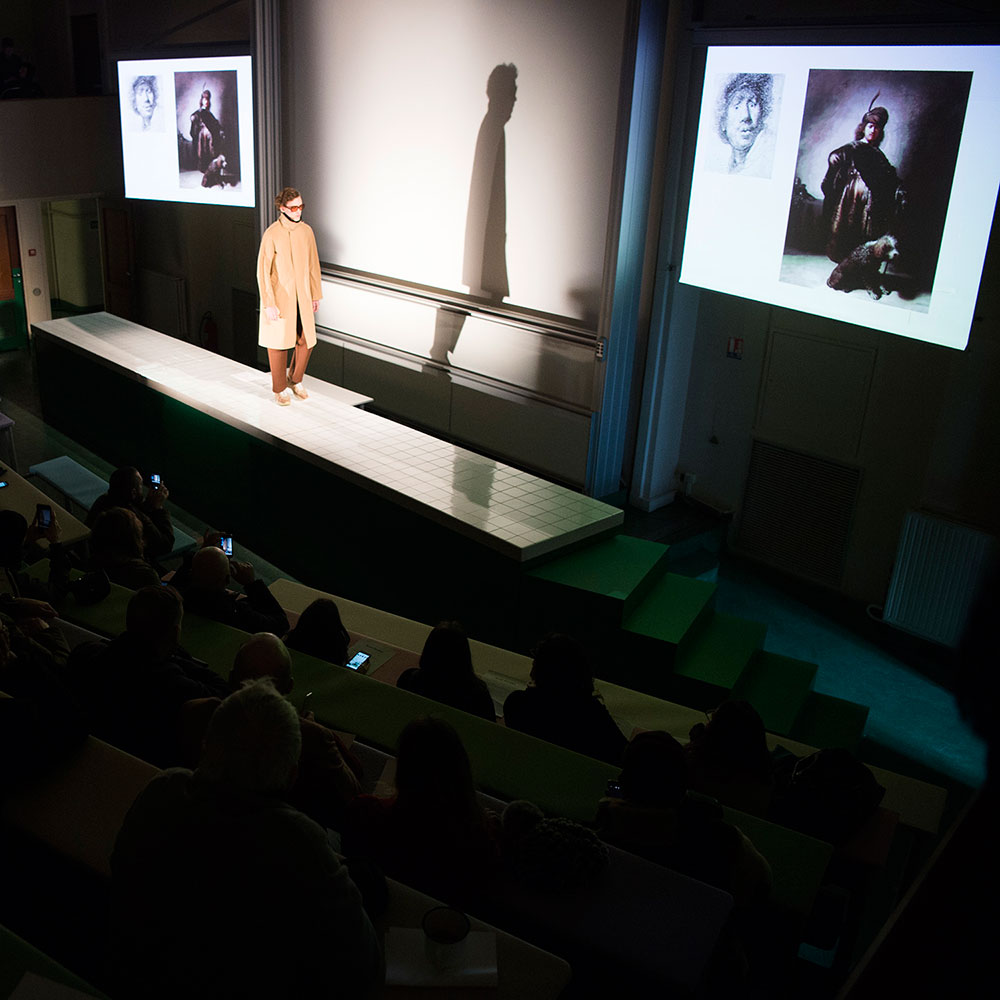 The season began by scrutinising the prevailing obsession with business. ‘Despite this I sort of realised that there isn’t a businessman as such today. That’s why I started to work around the tailoring, and look towards the fetishising of working men in the 80’s, going deeper,’ Johansson says.

He’s right of course; the entrepreneurial dotcom age has dramatically shifted the way we dress for work. The collection is consciously mono-directional, as 1980’s suiting in pastels riffs off couture detailing from the 1940’s. ‘There are some small solutions for pockets that I stole from couture elements, but still keeping it in the men’s show. The sneaker has a wedge inside which is feminine but it gives him more power when he walks. The colour palette is taken from this idea that this guy eats sorbet at a mahogany table,’ he adds.

Following Donald Trump’s election and Brexit, together with big elections looming across Europe, so many of the collections shown in Paris this week have channelled a new, romantic optimism that we must adopt in difficult times. ‘It was our gamble to do this,’ Dreyfus said. ‘Some people were like, “oh fashion people don’t care about this”, but that’s just not the case. With what’s happening around the world today, there is a real need for generosity and a sharing of knowledge. We have to care now more than ever.’