Anyone who has ever wished for an invitation chez Vincent Darré need only head to the Paris auction house Piasa, where the contents of his imaginative, plush Paris home have been restaged throughout the second floor viewing rooms. The buoyant designer and furniture decorator has made a sweeping purge of pieces from his own collection, which Piasa will sell on 23 November.

As the marvellously surrealist yet tasteful mise-en-scène makes clear, the auction consists of notable Maison Darré designs and personal effects alike; his ’Conversation’ armchairs (both with their ‘heads’ and ‘guillotined’), the Calder-inspired mobile lacquered tables, the ’Ossobucco’ bone-legged series, and the rose gilded ’Colonne-Ecrevisse’ upright shrimp cabinet are all up for grabs, as are a pair of shoe sculptures by Yayoi Kusama (from 2001), various portraits of the designer, anatomical curios and antique finds spanning from the 1800s through to the mid-20th century. A quick online search will yield photos of his apartment for those seeking proof that all this – and so much more – coexisted in a single apartment. 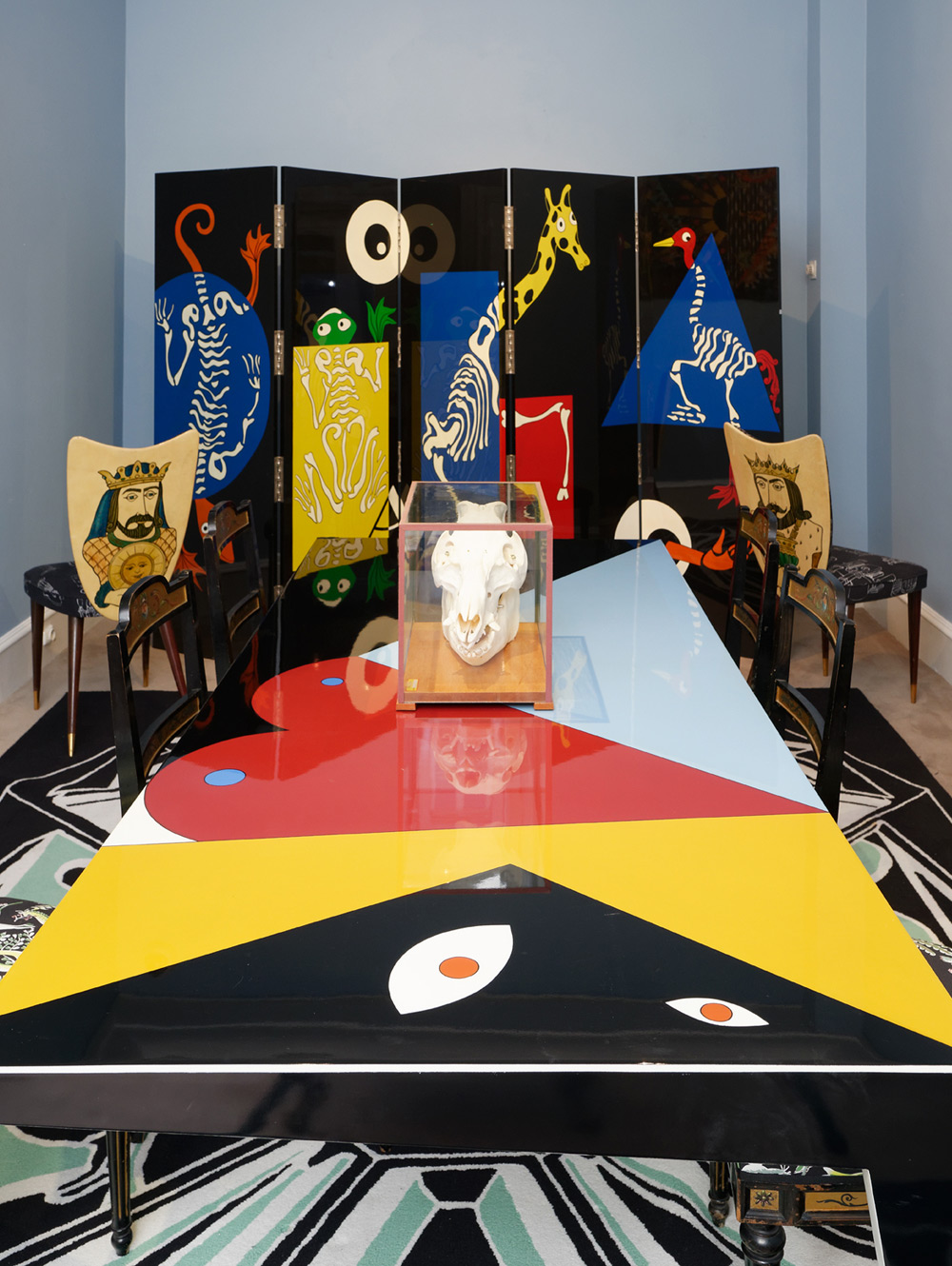 Perched on the ’Petit Prince’ metal-framed bed, its tented fabric covered in Darre’s Dalí-esque motif for Pierre Frey, the designer tells Wallpaper* that the sale represents the end of one era and the beginning of another, which will be marked by the opening of a new apartment-style space opening on rue Royale next year, in addition to a retrospective book. ‘I want to truly create a universe, rather than just showing my work. We’ll mix it all and it will really feel like a home,’ he says, implicitly comparing the forthcoming project to his previous showroom on rue du Mont Thabor.

To be sure, the exhibition further reinforces the inseparable overlap between his public-facing and private domains. Often referring to his apartment on rue de Bellechasse in the 7th arrondissement as the ‘laboratory of my dreams’, Darré insists he has no plans to uproot. Rather, he says the elimination process had the cathartic outcome of a blank canvas to paint fresh. 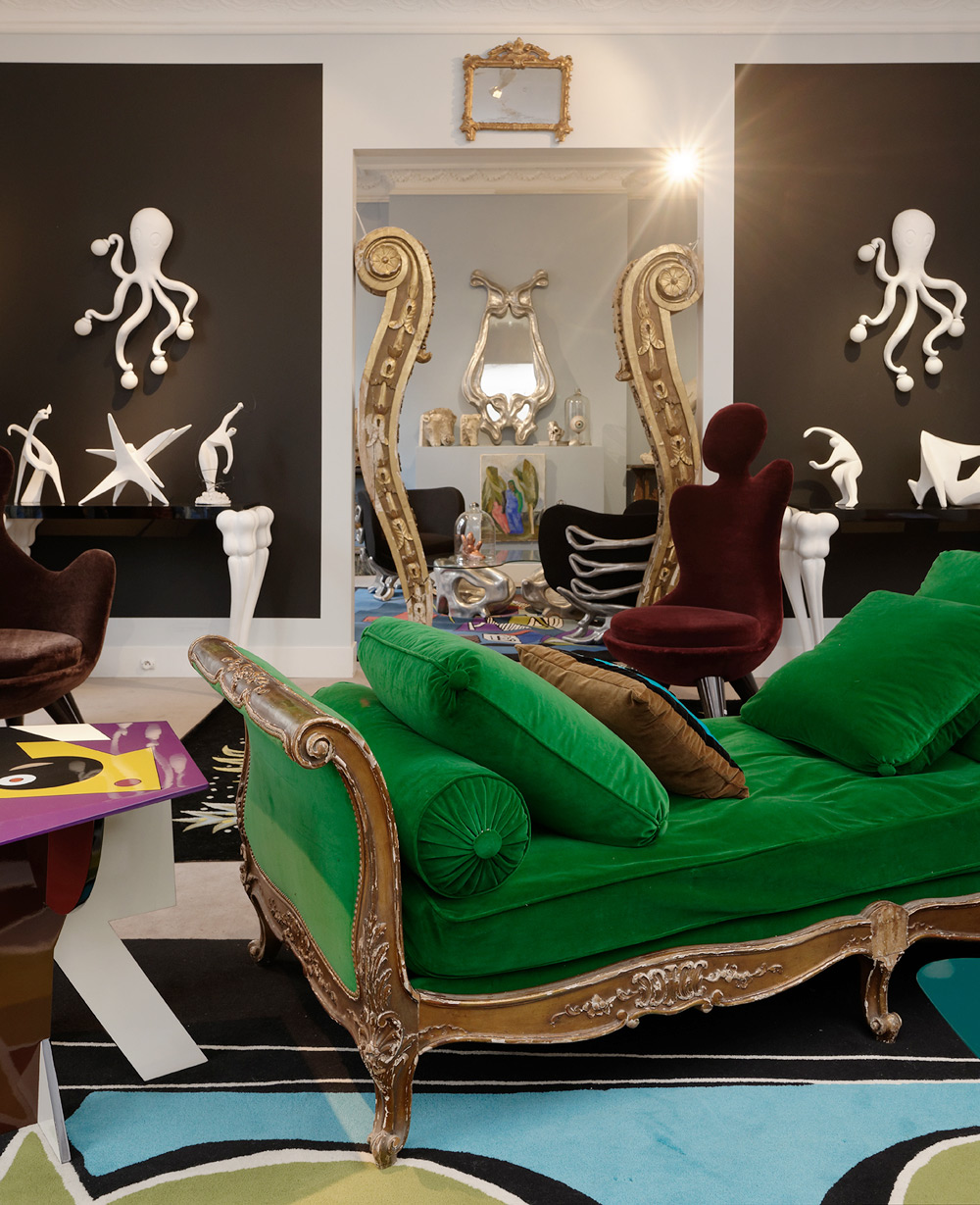 In foreground from left, ’Table tableau’, by Vincent Darré; chaise longue ’récamier’, from the Napoleon III era; and ’Conversation’ armchair, by Vincent Darré, for Maison Darré, upholstered in Pierre Frey velor of mohair

Prospective buyers, meanwhile, need not be reminded of the provenance factor – that the pieces belonged to someone who embodies unparalleled Parisian flair. Darré remains modest on this count, except to offer that many of his designs are ‘the last of their kind’ and that the catalog ‘gives some meaning to my career’.

If several lots stand out as particularly valuable – to wit, his unique, eight-panelled screen featuring neo-dada imagery embellished with gold leaf and polished aluminium – Darré has come to terms with the sentimental value of others, such as a vintage mechanical music doll à la George Méliès, a gift from his parents. ‘I think you shouldn’t hold onto memories too much,’ he maintains, crediting Karl Lagerfeld for teaching him the importance of change (Darré worked at Fendi for six years in the mid-90s). ‘When we’re surrounded by objects and connections, we stop growing,’ he adds, citing Pierre Bergé as someone who regularly streamlines his collections. ‘It keeps you from living in the past. And that’s really important, especially when you’re in creative process, it helps you to move on.’ 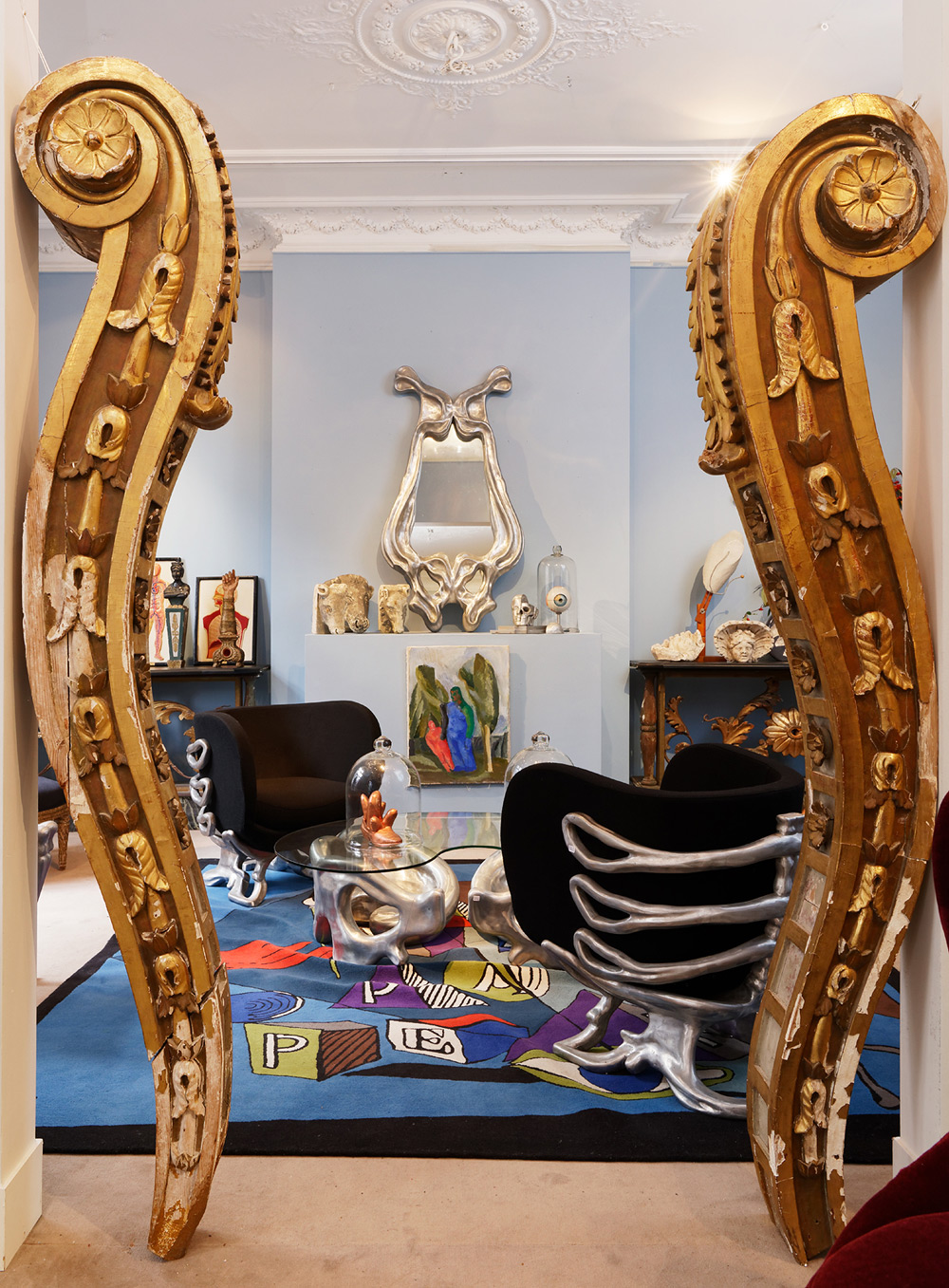 Darré’s friends, however, already seem nostalgic for the apartment as it once was; apparently, no one can believe he is parting with a pair of baroque filigreed wood columns, which ‘represented this house’, he admits. ‘They feel like something’s disappearing because they’ve slept there, on these sofas and they have so many memories,’ he continues, hinting at countless decadent nights. When suggested that his inner circle may step up to reclaim pieces as souvenirs, Darré replies, ‘Yes, but they also might feel strange about it. We’ll see.’

’Vincent Darré: Extravagance Dadaïste’ is on view until 23 November. The auction will take place that evening, at 7.30pm. For more information, visit the Piasa website