Car design has, for some 100 years, managed to steer clear of any major technological upheavals. The vast majority of cars we drive today are still based on blueprints developed by Karl Benz and Gottlieb Daimler in 1886 – the Benz Patent Motor Car – alongside other iconic cars of the early 20th century such as the Model T Ford. They mostly have four wheels, front-facing seats and an engine powered by a liquid, formed over millennia and lifted from the earth’s crust.

But disruption is becoming more commonplace in the automotive industry. ‘We [will] see more change in the next five years than there’s been in the last 50,’ said Dan Ammann, president of General Motors earlier this year. Advances in technology enable the development of driverless and connected cars, powered by electricity and hydrogen fuel cells. These developments have the ability to radically adjust the way we perceive, interact, travel and consume cars, particularly in an urban setting.

The next generation of auto designers must engineer cars that embrace these technologies and tap into new consumer trends while capitalising on decades of brand legacy and customer loyalty. For students of the Royal College of Art (RCA) Vehicle Design faculty taking part in this year’s Royal Automobile Club design competition, the task was designing a sustainable, connected and potentially driverless vehicle for an imagined Brighton to London rally in 2026. 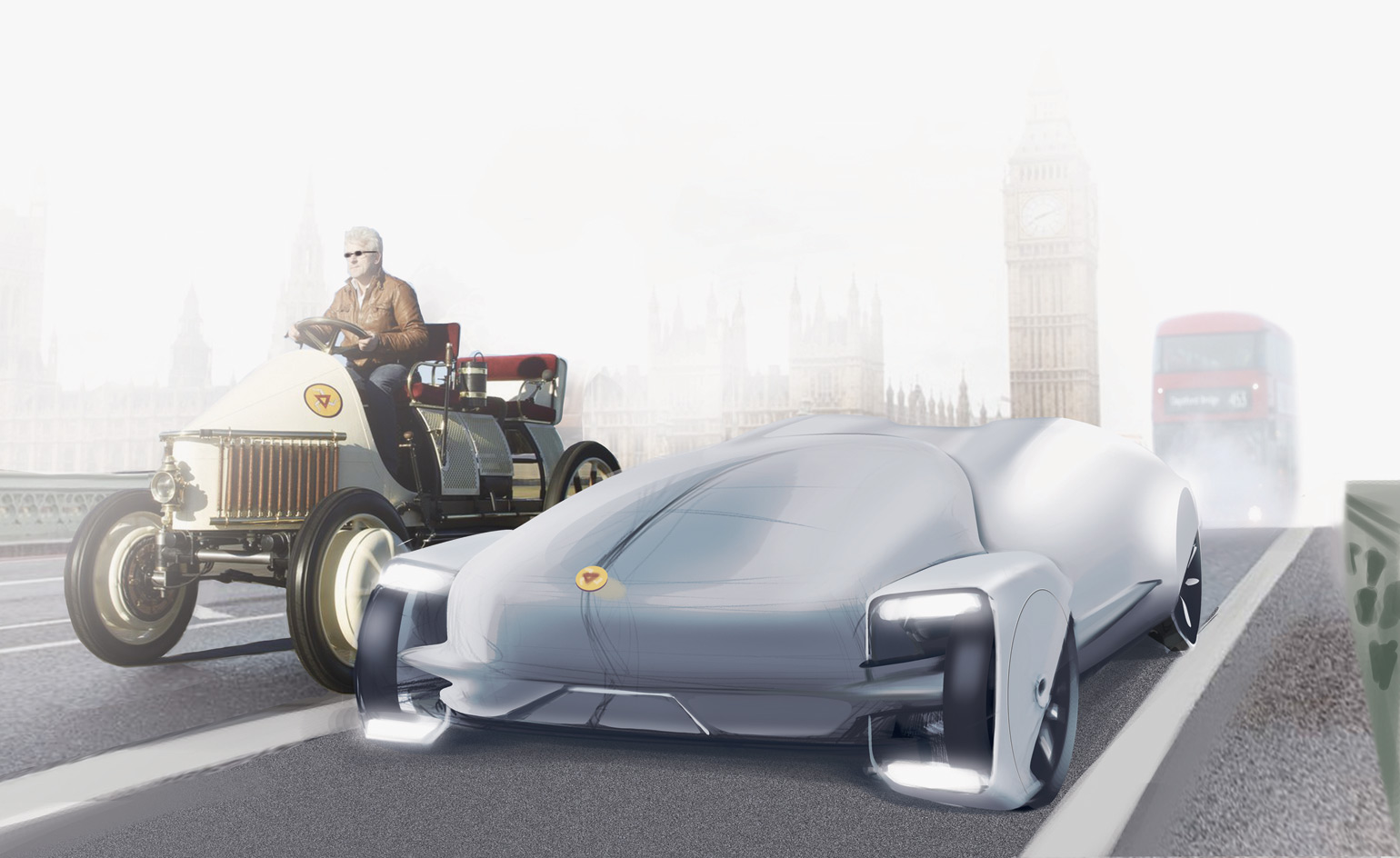 Building on the heritage of European brands such as Mercedes, Peugeot and Darracq, the concepts built on the aesthetics and characteristics of a typical early 20th-century car on the run. With four weeks to complete the project, 12 students were shortlisted to attend the final round, held in the palatial surroundings of the Royal Automobile Club in Pall Mall, London.

Overall competition winner Yang Lui’s ’Benz Velo’ is inspired by the 1894 car with which it shares its name. As with one of the first small cars, Liu’s concept is intended to be simple, lightweight and inexpensive, using few components to form a solution for commuters in an urban environment. With two electric motors in each wheel, the car is capable of rotating on its axis with movement controlled by a central joystick.

Bin Sun’s ’Mercedes Simplex’ concept is based on the 1902 car of the same name. Sun’s design captures the Simplex’s sporting credentials in its shape as a driver’s car for 2026, with driving pleasure and luxury a focus. ‘Traditionally, people have always looked to the front of the car but in this concept, it’s a different experience for the passengers, experiencing luxury and views out of the rear instead,’ says Sun.

Stavros Mavrakis’ ’Vis-à-vis’ concept is based on the Peugeot Type 9 Vis-à-Vis from 1895. The face-to-face configuration encourages interaction with fellow passengers and, with the exposed cockpit, encapsulates the thrill of open touring. 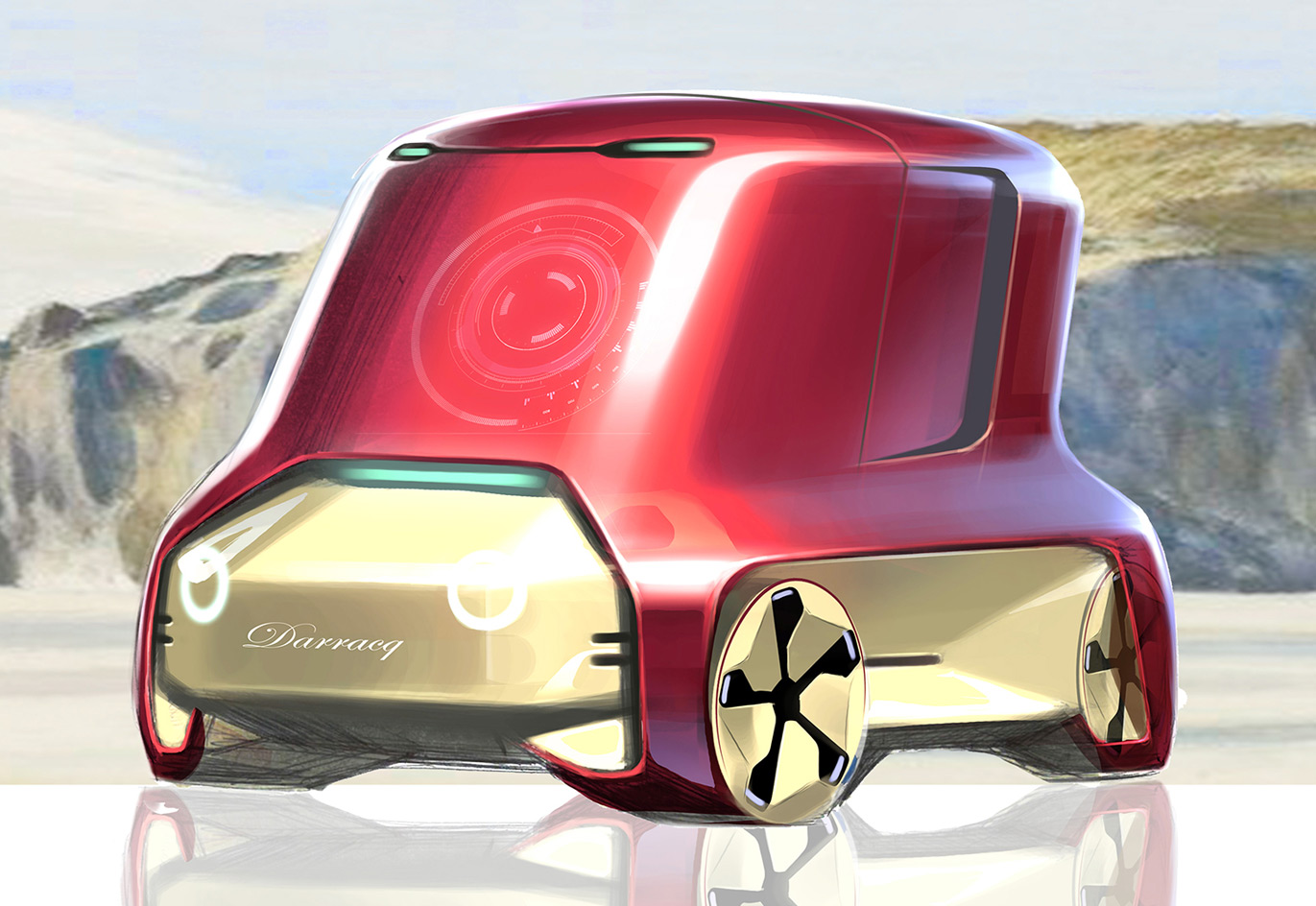 De Dion-Bouton, one of the largest engine manufacturers of the early 20th century, supplied automakers all over the world. Jack Watson’s 2026 ‘Type H’ is a contemporary take on De Dion-Bouton engineering, powered by hydrogen fuel-cell technology, which is contained within a platform, located underneath the cabin. ‘Because it’s a saloon car, by definition, the cabin is separate from the storage compartment and rest of the vehicle, so there’s a clear separation in the different compartments of the vehicle,’ says Watson.

Zi Lin’s ’Darracq for 2026’ takes its inspiration from the Darracq Tonneau of 1902. Designed for users aged between 25–35 years, the car’s layout can be shifted from a four-seater compact to a two-seater Kei-car by folding or adjusting the backseat and the roof.

Eunji Choi’s design is a reimagined 2026 iteration of the Benz Velo from the late 19th century. Choi’s concept offers a premium short-distance car sharing system within urban environments with a focus on privacy through the enclosed cockpit.

Bin Sun’s ’Mercedes Simplex’ concept captures the model’s sporting credentials in its shape as a driver’s car for 2026, with driving pleasure and luxury a focus