Machine age: a new show explores the blurring boundaries between humans and robots

Looking up and down any train carriage on your way to work today and you can’t help but notice that almost every single person sits craned over a screen, staring blankly into its blue glare. In recent decades, the presence of technology in our day-to-day lives has gradually increased to the point that it has drastically changed the way in which we interact with each other. However, as Vitra Design Museum director Mateo Kries notes, it is only in the last two to three years that this phenomenon has been so intensely discussed. Last week, a new exhibition titled ‘Hello, Robot. Design between human and machine’ opened at Vitra’s Weil am Rhein Campus with the intention of examining the topic through the lens of design.

‘We’re not interested in displaying the latest technological innovations,’ says Kries of the exhibition’s focus. ‘Instead we looked at projects that say something about design and robotics – that really go beyond looking at the simple form or technology and instead say something about how we interact with the technology, how they interact with us and how they influence our interaction with other people.’ 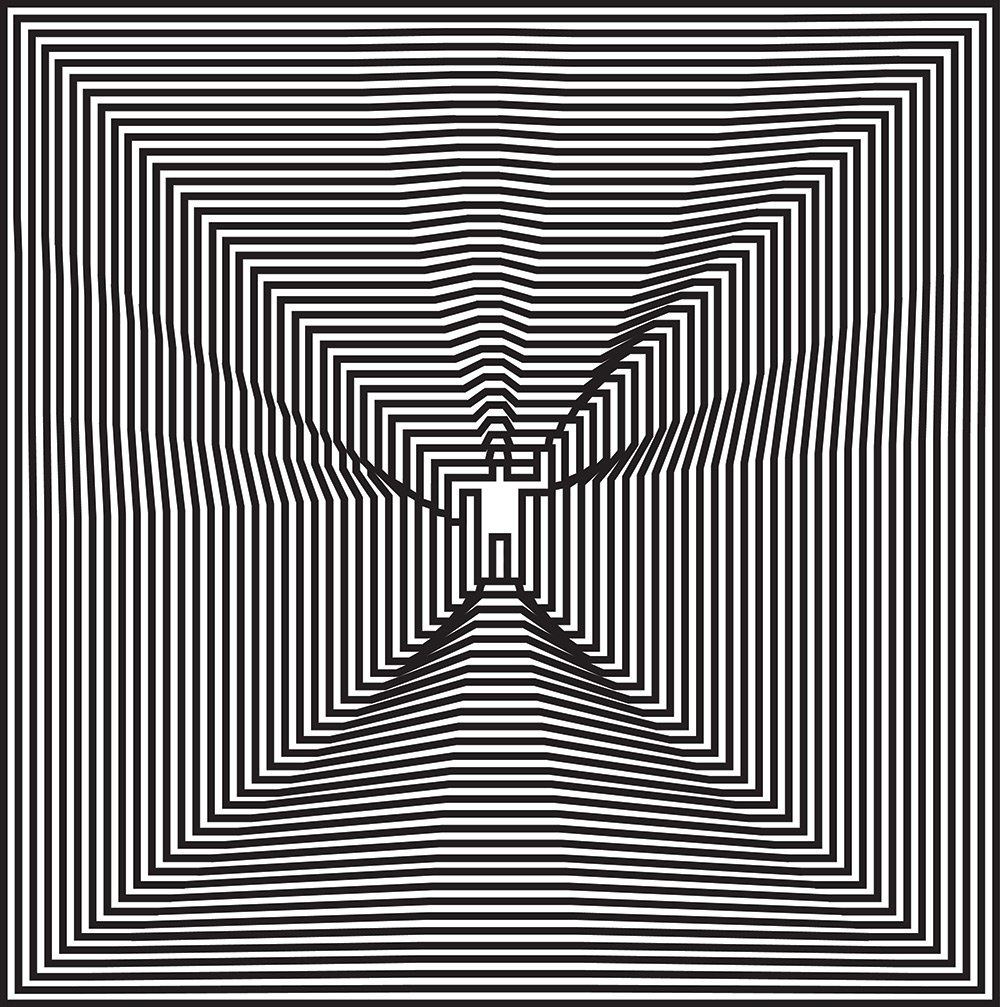 Divided into four chapters, the exhibition, curated by Amelie Klein and designed by Basel-based Emyl, takes visitors on a journey that begins by examining our historical relationship with robotics and ends in an equally thrilling and disturbing future where machines and humans become one.

In the exhibition’s first chapter, ’Science and Fiction’, the robots we grew up with in popular culture are displayed around a darkened space, spotlit like alien species. Here, Star Wars’ R2-D2, Rosie the Robot from The Jetsons and the infallible computer HAL 9000 from Stanley Kubrick’s 2001: A Space Odyssey all illustrate how our expectations of robots have been shaped by the media. Other works, such as Eric Pickersgill’s Removed series of portraits, where sitters are asked to recreate their uncommunicative and aloof gestures when holding personal devices, raise questions such as do we really need these devices? And, do we even like them? 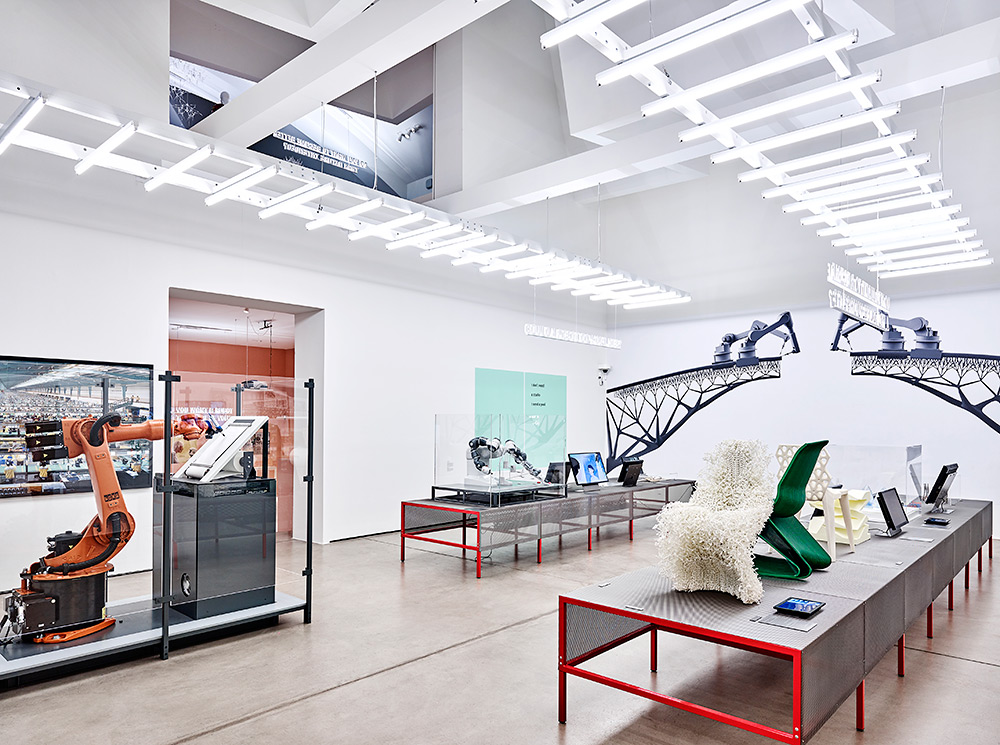 Installation view of ’‘Hello, Robot. Design between human and machine’

This line of questioning continues throughout the exhibition as a way of making visitors re-examine our alarmingly ambivalent attitude to the way in which robots have infiltrated our lives. ‘The technology is there, it will be used so we better learn about it and discuss it rather than leaving it to the big data companies do with it what they want’ explains Kries.

A bright white lab-like space dedicated to robots in the work environment tackles the common fear of robots replacing humans. Here exhibits such as YuMi, a dextrous dual arm robot, highlight the potential for robots to work in close collaboration with humans. Designed to perform repetitive small-part assembly work required for the electronics industry, YuMi is safe enough to use without protective barriers. Meanwhile, Robotlab’s robotic scribe, programmed to constantly write manifestos, raises the question of whether robots could also eventually fulfil intellectual roles in the workplace. 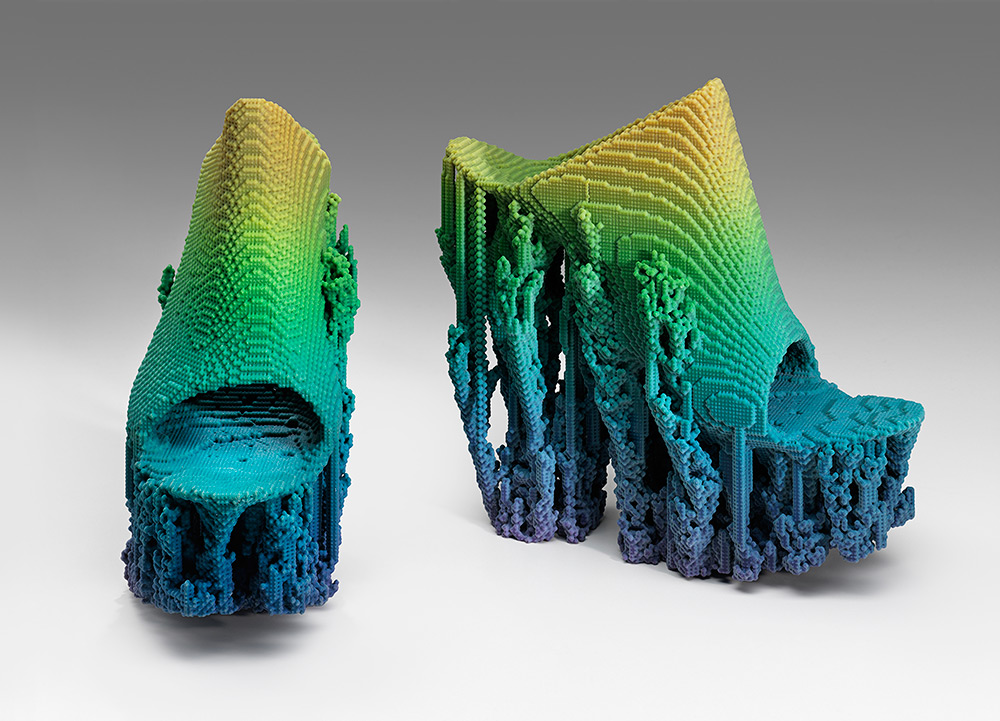 Moving from the workplace into the home environment, a room of care-giving robots and smart objects asks the question ‘Do you want a robot to take care of you?’ Displayed against a flesh-coloured backdrop, existing devices such as the Amazon Echo are showcased alongside conceptual pieces such as Philipp Schmitt, Stephan Bogner and Jonas Voigt’s ‘Raising Robotic Natives’ – a collection of four parenting aids that imagine a world in which domestic robots are ubiquitous. Craned menacingly over a baby’s crib, the ‘Robot Baby Feeder Toolhead’ is an industrial arm equipped with a baby bottle on its grip.

‘Robotics and new technology give us just as much reason to be very excited as to be worried, and we have to look at both,’ says curator Amelie Klein of the exhibition’s tendency to swing between visions of dystopia and utopia. ‘We would really like people to come in with one set of ideas and opinions and leave the exhibition realising that there are both positives and negatives.’ 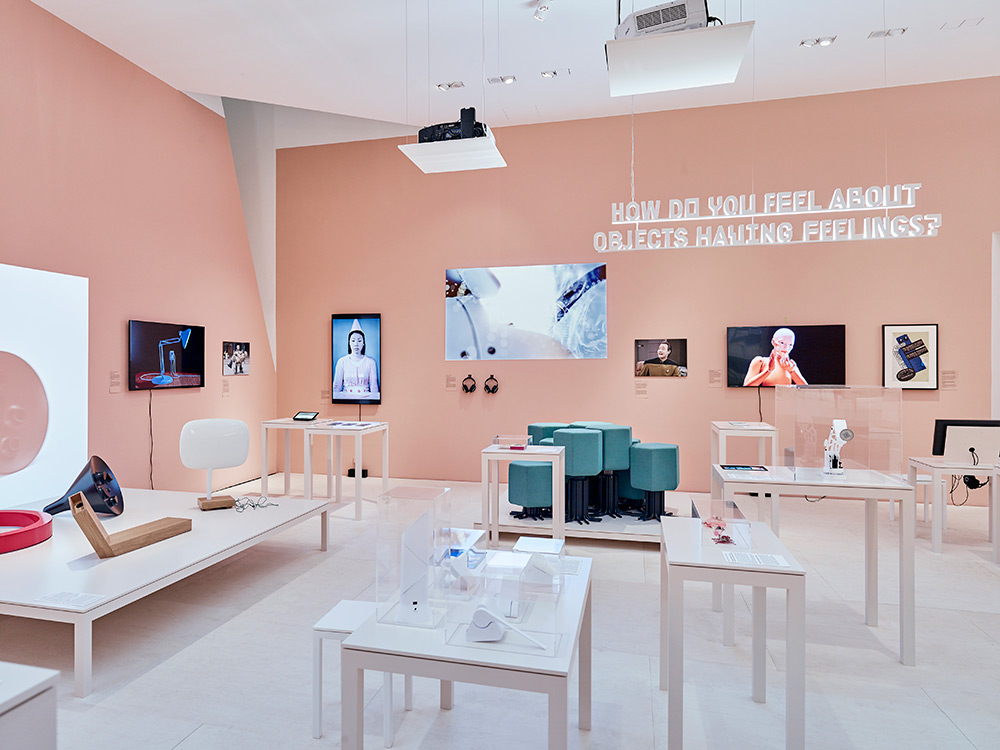 Installation view of ’Hello, Robot. Design between human and machine’

Perhaps no where is this clearer than in the exhibition’s final chapter, ‘Becoming One’, where we see how prosthetics, implantations, exoskeletons and connected homes are all pointing towards a future where humans and machines physically merge. Designer firm Emyl use mirrored plinths that reflect visitors as they move around the space eluding to the blurring of boundaries. At this point, Klein is keen to stress that this future is not hypothetical. ‘It is now that we have to discuss what the repercussions will be, and how we want to deal with this. We live in a physical world that has become connected and smart. This is important for people to realise. It’s now, it’s not that we have to be afraid of something that comes tomorrow, it’s already here.’

‘Hello, Robot.’ comprises more than 200 exhibits from the fields of design, art, engineering and film

The spectrum of exhibits ranges from industrial robots to installations, ’questioning where the boundary lies between work that can be automated and human creativity’

In the ‘Science and Fiction’ segment, the robots we grew up with in popular culture – including Star Wars’ R2-D2 – are displayed around a darkened space, spotlit like alien species

’Hello, Robot. Design between human and machine’ is on view until 14 May. For more information, visit the Vitra Design Museum website