In October last year, Iranian artist Mehdi Ghadyanloo completed a major public commission in Boston for the Rose Kennedy Greenway project. Emblazoned across a 5,230 sq ft wall opposite the city’s South Station, Ghadyanloo’s uplifting trompe l’oeil mural appears to slice the building open to reveal a line of men, women and children inside, each holding a red helium balloon as they ascend a spiral staircase. At the top of the staircase, which stops short of the ceiling, a single giant balloon slips into the blue sky through an opening in the roof. The mural, called Spaces of Hope, symbolised a positive vision for the future of US Iran relations; one that has been made all the more poignant by Donald Trump’s recent travel ban, under which Ghadyanloo would no longer be permitted to enter the country.

Picking up where the Boston mural left off, a new off-site show of Ghadyanloo’s work, put together by Howard Griffin Gallery, has recently opened at London’s 14,000 sq ft Ambika P3 space. Working with the same title, ‘Spaces of Hope’ gathers new canvases and etchings, as well as a dramatic sculpture that hangs from P3’s 10m-high ceiling. Throughout the darkened industrial space, a haunting, specially-commissioned soundscape by DJ Seth Troxler plays out, creating the perfect atmospheric setting for Ghadyanloo’s disorientating works.

On his canvases, all created within the last two years, clean-lined architectural forms sit in barren landscapes inspired by his home country, while powerless, faceless figures stand helplessly trapped above or inside, looking towards the exit; which is often, frustratingly, just out of reach. ‘I had these ideas when I was working on walls in Tehran,’ says Ghadyanloo, referring to the some 100 murals that he was commissioned to paint in his home city by its beautification bureau over a seven year period. ‘But these,’ he says, gesturing to the canvases, ‘these were not suitable for the public; people would have committed suicide if they had seen them! I feel a responsibility, especially for Tehran, because there, people there are on the edge, you know. I was one of them.’ 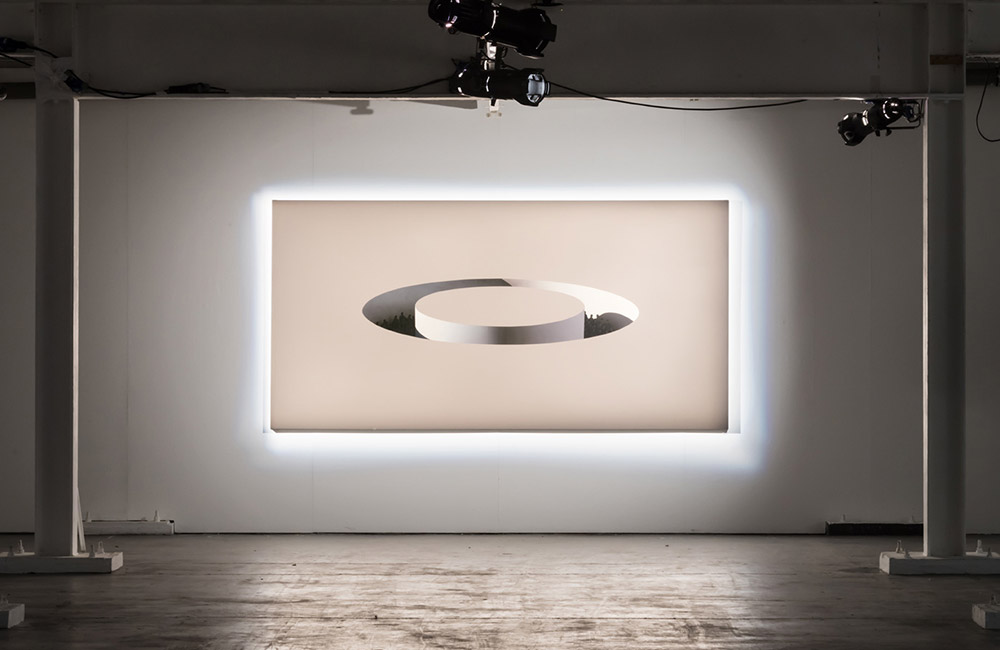 Installation view of ‘An Introduction To Stay’

In addition to the powerful canvases, a collection of intricate etchings are displayed along a corridor that sits in the centre of the subterranean space. Beyond this, P3’s cavernous triple-height space plays host to a 3D printed sculpture work that brings a scene depicted in one of Ghadyanloo’s etchings to life. Here, a huddle of faceless figures cling to a rope for dear life, suspended above a pool of water – an element that Ghadyanloo notes, is a nod to Japanese artist Noriyuki Haraguchi. In the vast space, the effect is like stepping inside his canvas.

While his colourful commissioned mural works have led to him being simplistically coined as Iran’s answer to Banksy by the press, Ghadyanloo is more inclined to draw comparisons with European surrealist painters such as Magritte, Girgio de Chirico and the minimal lines of modernist 20th century architects such as Le Corbusier. The dark themes in his work, he says, are informed directly by his harrowing experiences of growing up on a farm in Iran under conditions of war and economic sanction. ‘Painting is like therapy to me,’ he explains.

In more recent years, the opportunity to travel that his success has provided has equipped him with a fresh perspective. ‘I’ve found lots of connections between humans,’ he muses of his globe-trotting. ‘No matter where you grew up, what your religion is. There is no difference between us. We are all searching for hope, we are all looking for light.’

From left, An Introduction To Stay; and Routine Exercise

Routine Exercise; Genealogy Of isolation (Seclusion); and The City of Hope