While fighting for the US navy during the Second World War, Italian-American artist Salvatore Scarpitta was a ’monuments man’ – part of a team that traced and catalogued artworks stolen by the Nazis. This name now takes on new meaning, as an eight-year slice of the artist’s monumental oeuvre goes on display at Luxembourg & Dayan in New York.

From wartime detective to race car driver, Scarpitta was a man of many talents. This is reflected in his varied artistic practice, which ranges from visceral, 3D canvases to sculpted reconstructions of automobiles. Despite this broad opus, Scarpitta – who was represented by Leo Castelli – remains lesser-known than other post-war artists linked to the legendary dealer (think Rauschenberg, Twombly, Ruscha, Warhol). Luxembourg & Dayan’s timely exhibition makes moves to alter this perception, giving a niche – yet important – portion of Scarpitta’s work the space and clarity it deserves.

The display spans between two pivotal moments that defined Scarpitta’s career: his ’bandage’ paintings from the late 1950s, and his shift away from the canvas towards artistically re-building race cars in 1964. These cosmic shifts, like spokes in a wheel, gave the artist’s long career momentum, but left him tricky to categorise or define, exacerbated by his mix of Italian and American influences. 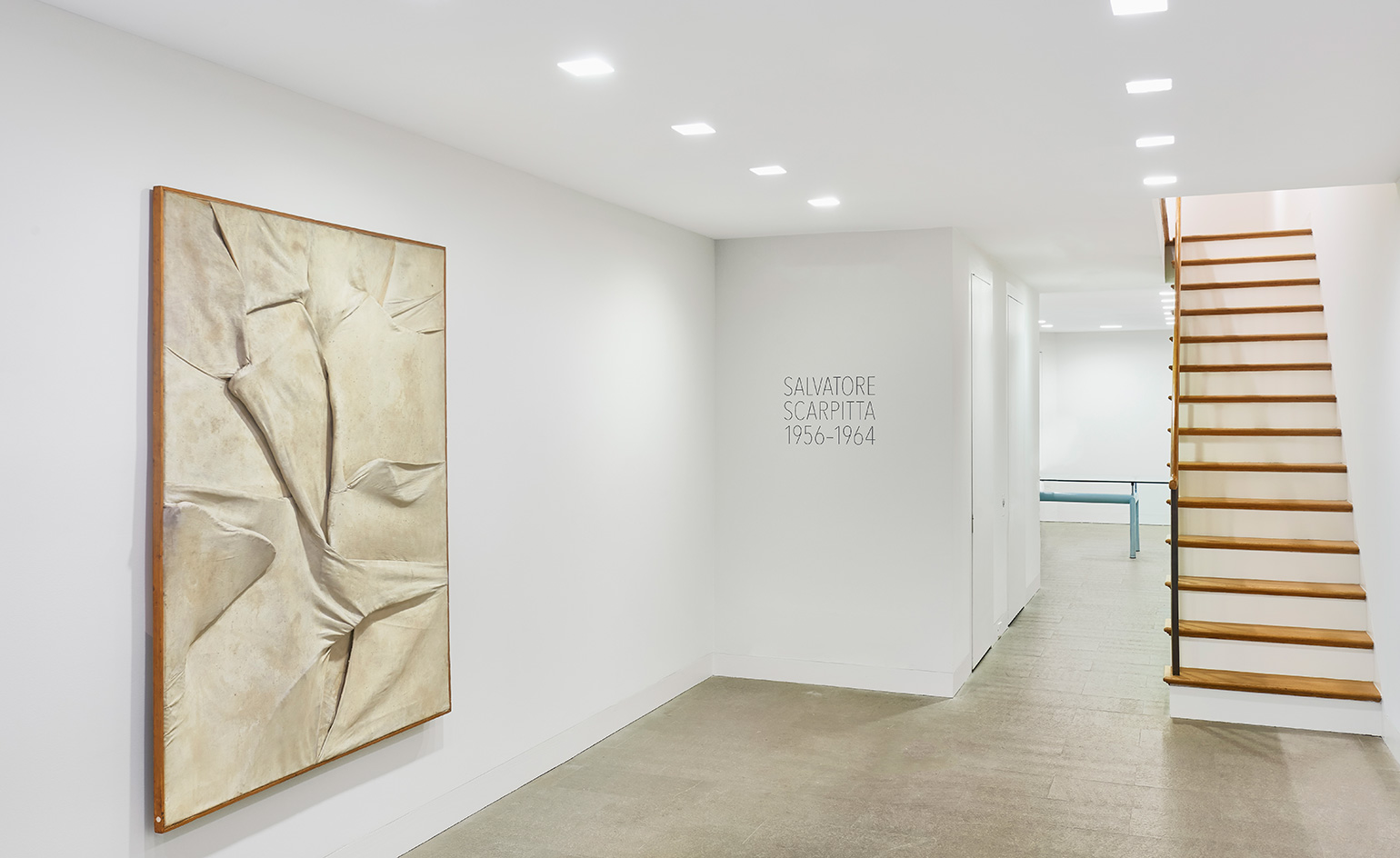 ’In 1958, Scarpitta returned to New York from Rome, where he had been living for almost two decades,’ Amalia Dayan explains. ’He acted as a sort of one-man bridge between these two worlds, and this body of work captures his responses to these multiple political, cultural and artistic influences swirling around him from both directions.’ From his 1956 Sul limite e oltre (Composizione), remnants of Scarpitta’s Italian-inspired, expressionistic touch can still be felt. Later, we trace his turn towards a more graphic language, incorporating components of Hollywood race car culture, as in the seatbelts of Tishamingo (For Franz Kline), from 1964. The artist himself once said, ’I felt that I had something to say in that period of, shall we say, the American background as the stimulus of those works, and the racing cars were my way of showing that I, too, knew something of America.’

With such dualities crashing together in the work, picking this exploratory period to focus on was a genius move from dynamic power-duo Dayan and Daniella Luxembourg. But it wasn’t without its difficulties. ’Scarpitta’s works are scattered all over – many are in collections in Europe – so the process of hunting them down was quite intense,’ Dayan reveals. ’But having the tight, eight-year parameter also opens up a different kind of creativity, since it allows us to take a scholarly approach and to really dive into historical detail and context.’ The deft academic qualities of the show do not outweigh its aesthetic ones, helping to make Scarpitta’s posthumous legacy ever more important.

This timely exhibition makes moves to alter this perception, giving a niche, yet important, portion of Scarpitta’s work the space and clarity it deserves

’Having the tight, eight-year parameter... allows us to take a scholarly approach and to really dive into historical detail and context,’ explains Amalia Dayan of the show’s curation

’Salvatore Scarpitta, 1956–1964’ is on view until 23 December. For more information, visit the Luxembourg & Dayan website