In the autumn of 1963, John F Kennedy was assassinated in Dallas, Texas. His wife, Jackie Kennedy, was wearing a strawberry pink suit at the time. She famously insisted on wearing it – still stained with his blood – during the swearing-in of Lyndon B Johnson and for the flight back to Washington DC with the president’s body.

It was this pivotal event – and sartorial detail – that the late American painter Cy Twombly devoted a cycle of paintings to immediately after. The 1963 series Nine Discourses on Commodus would go on show the following spring at Leo Castelli’s gallery in New York. As the story goes, Twombly didn’t travel with the works and they were installed without him in the wrong order. Critics vehemently derided the exhibition. Donald Judd wrote a ‘killer review’; others proclaimed they were ‘old-fashioned’ and ‘too European’. 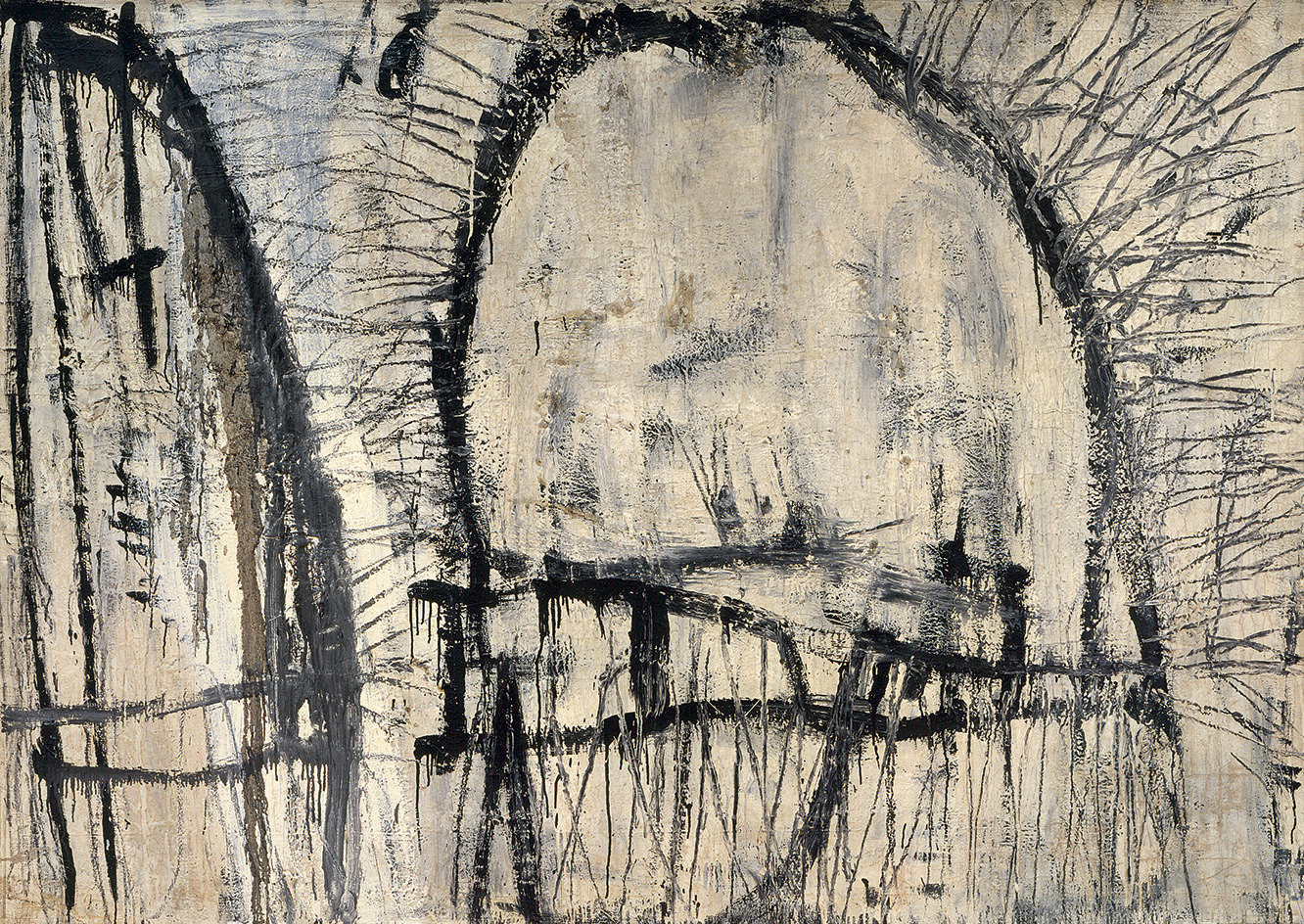 Now, these remarkable works are on display at the Centre Pompidou as part of a definitive retrospective opened in Paris, the first since the artist’s death in 2011. Centred on three major cycles – the aforementioned Nine Discourses on Commodus; Fifty Days at Iliam (1978); and Coronation of Sesostris (2000) – the survey spans Twombly’s 60-year career through some 140 paintings, drawings, photographs and sculptures mapped out chronologically.

Born in 1928 in Lexington, Virginia, Edwin Parker Twombly adopted his father’s nickname, ‘Cy’ (after the baseball player Cyclone Young). His affinity for art formed early on, nourished by the guidance of the Spanish artist Pierre Daura. By 1950, Twombly found himself studying in New York, where he would meet artists Robert Rauschenberg and Jasper Johns; the trio would forge a deep, lifelong friendship, influencing each other’s artistic practices. (In serendipitous symmetry, Rauschenberg is also the current subject of a major retrospective at Tate Modern in London). 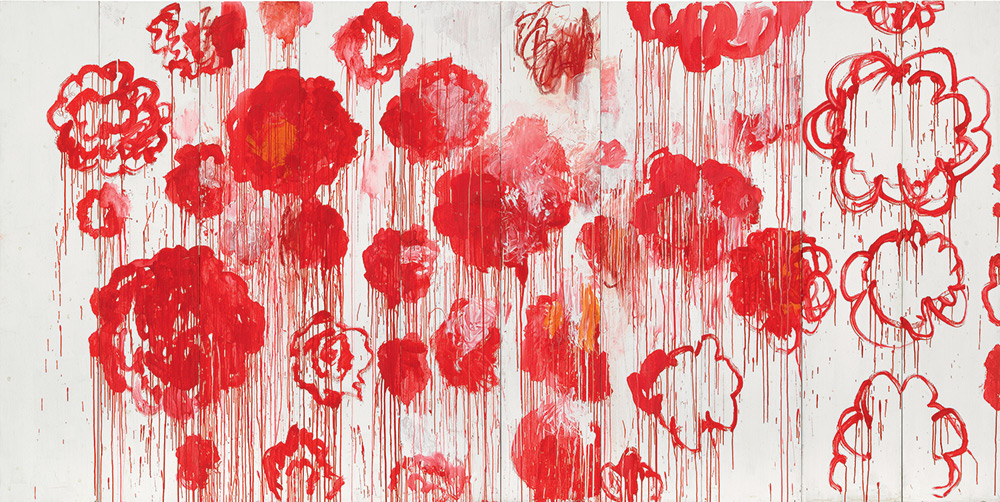 The show opens with a painting exhibited at Twombly’s first solo exhibition at Stable Gallery in New York in 1955. It’s a work that the artist kept all his life, ‘unique’ in its semi-figurative nature. Among the graffiti-like scrawls, an eye stares down visitors at the entrance. As curator Jonas Storsve explains, ‘The visitor watches the painting, at the same time the painting looks back.’ 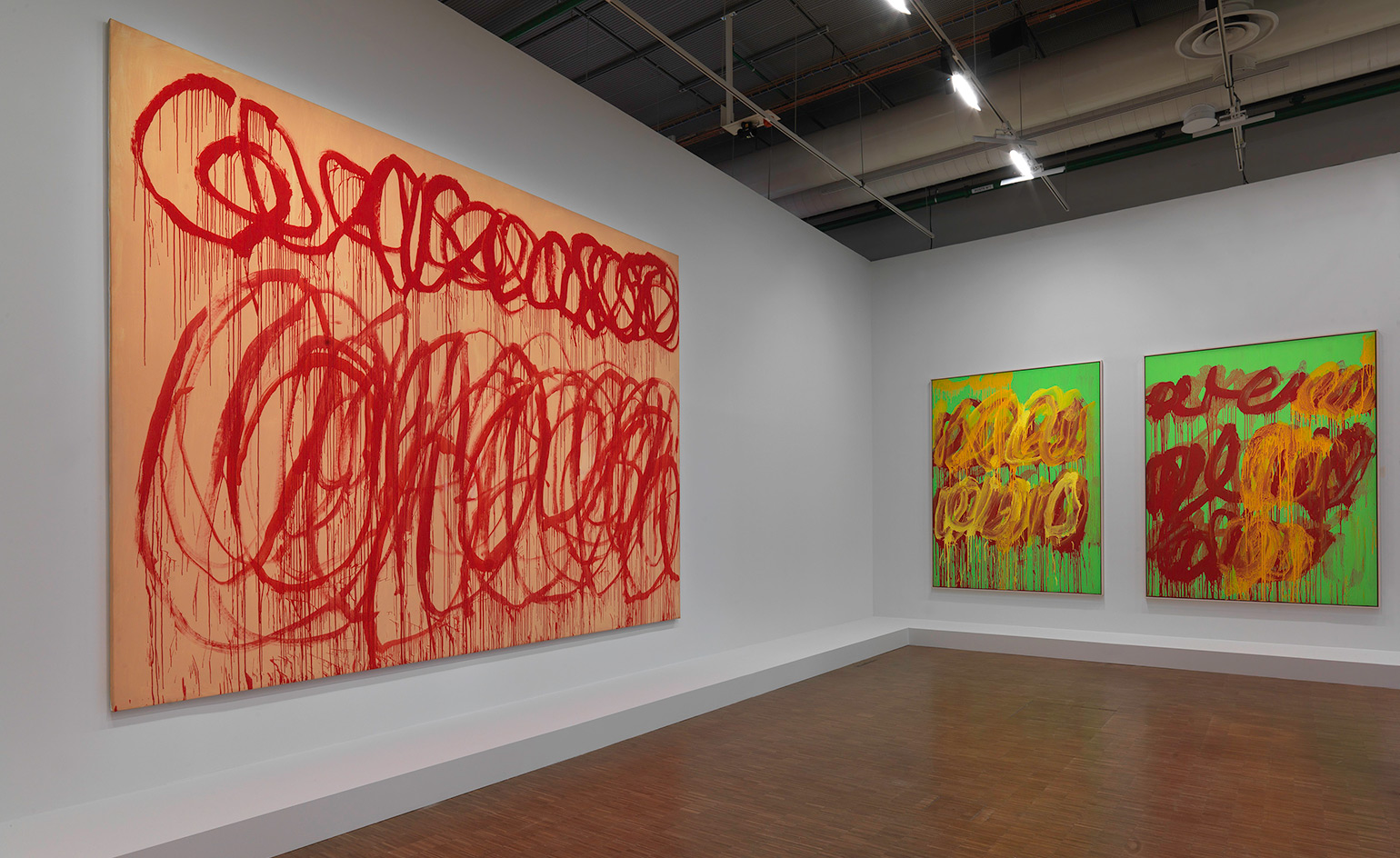 The retrospective closes with works produced at the end of Twombly’s career, in his studio in Gaeta. © Centre Pompidou. Photography: Philippe Migeat

Twombly’s artistic transformation is explored in earnest at the Centre Pompidou. Along the way, visitors also get a glimpse into other lesser-known facets of his practice – an array of his sculptures perfectly punctuate the exhibition halfway through, while his Polaroids are a revelation. (The enigmatic Twombly photographed quite extensively throughout his career, but only first revealed these images in the 1990s.)

In 2005, at the height of the Iraq War, Twombly embarked on an epic series of paintings in his Gaeta studio. Returning to the characteristic writing he had explored in the Black Paintings of the late 1960s, the Bacchus series serves as the show-stopping finale; potent, swirling canvases of blood-red paint allude to wine and death at once. Twombly’s evolution is complete. 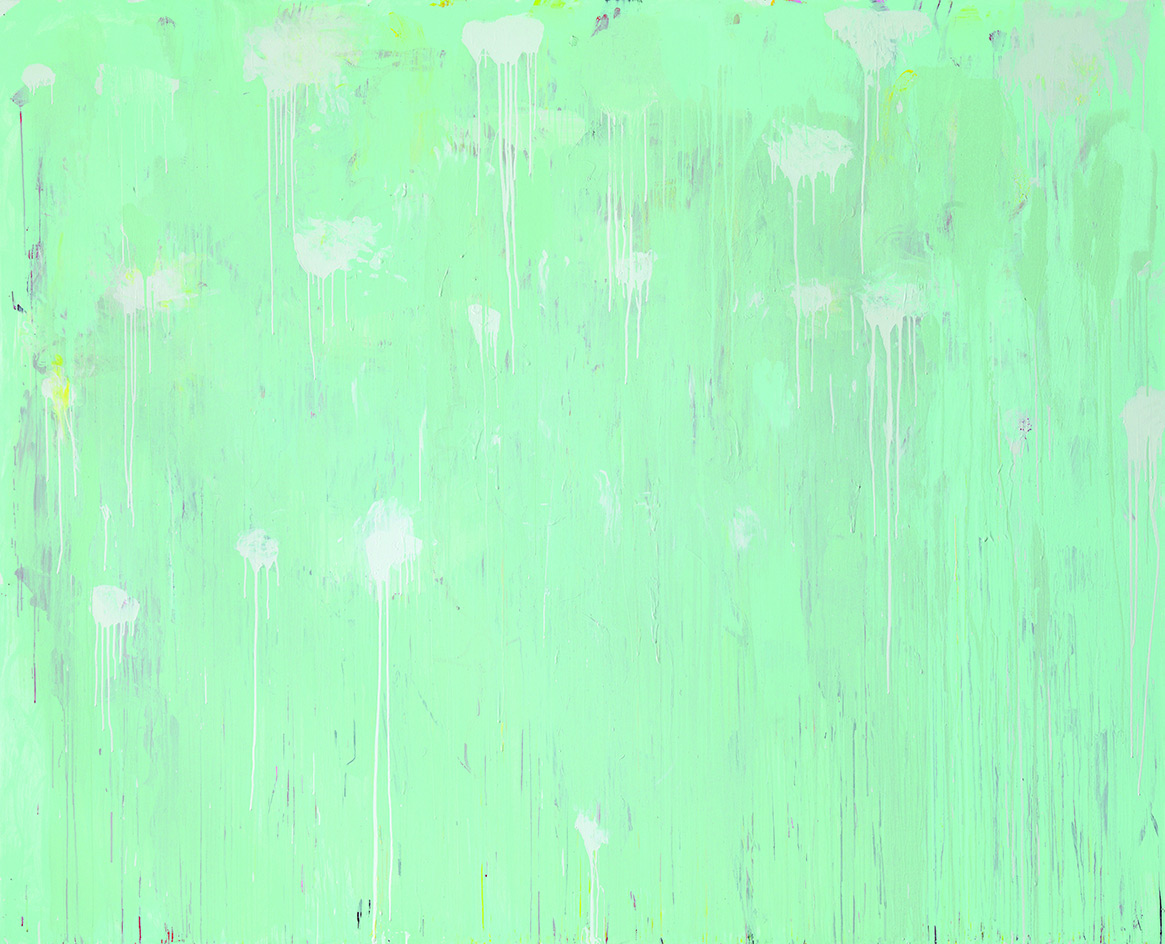 The Centre Pompidou retrospective – comprehensive, but arguably incomplete – does an immense service to Twombly’s oeuvre, unfurling the complexities of an artist oft maligned in his time, but certainly not now.

The fourth room of the exhibition is dedicated to works the artist produced in Rome between 1960 and 1962, following his marriage to Italian aristocrat Luisa Tatiana Franchetti. Twombly produced some of his most sexual paintings during this period. © Centre Pompidou. Photography: Philippe Migeat

In late 1963, following John F Kennedy’s assassination, Twombly devoted a cycle of nine paintings to the Roman emperor Commodus (161–192), son of Marcus Aurelius and remembered as a cruel and bloodthirsty ruler

The Paris exhibition was organised with the support of the artist’s son, Alessandro Twombly – the show includes this 1965 portrait of him as a child.
© Cy Twombly Foundation. Courtesy of Archives Nicola Del Roscio

Visitors also get a glimpse into other lesser-known facets of Twombly’s practice – an array of his sculptures perfectly punctuate the exhibition halfway through. © Centre Pompidou. Photography: Philippe Migeat

In 1975, Twombly bought a 16th-century house at Bassano in Teverina, north of Rome, establishing his summer studio there. Inspired by Homer’s Iliad, read in Alexander Pope’s 18th-century English translation, he embarked in 1977 on the major cycle Fifty Days at Iliam, the ten paintings in which were completed over two successive summers. © Centre Pompidou. Photography: Philippe Migeat

A selection of Twombly’s Polaroids are also on show as part of the survey.
© Centre Pompidou. Photography: Philippe Migeat

Coronation of Sesostris is one of the major painting cycles that punctuated Twombly’s career, differing from the purely abstract series in its incorporation of narrative elements. © Centre Pompidou. Photography: Philippe Migeat

The cycle is inspired by the god Râ, whose two sun-boats traversed the heavens both day and night. © Centre Pompidou. Photography: Philippe Migeat

For the Bacchus series, painted at Twombly’s Gaeta studio in early 2005, the artist again remembered Homer’s Iliad and returned to the writing he had explored in the Black Paintings of the late 1960s. Pictured, Untitled (Bacchus), 2005. © Cy Twombly Foundation. Courtesy of Udo et Anette Brandhorst Collection

Here, he replaced the white wax crayon with red paint evocative of both blood and wine, allowed to run freely across the vast canvases. © Centre Pompidou. Photography: Philippe Migeat

‘Cy Twombly’ is on view until 24 April. For more information, visit the Centre Pompidou website