David Gill Gallery in London presents a new body of work by British artist Barnaby Barford, including new ceramics pieces as well as the first showing of his drawings on paper. The exhibition includes a series of animal sculptures – marching in single file across the gallery floor – as well as seven large-scale Word Drawings’, while a second room features animal heads mounted like trophies on mirrors, offering an ominous interpretation of the zoomorphic presence in the exhibition.

The focal point is no doubt the queue of animals, leading towards a life-sized polar bear. The animals that Barford chose for this (an elephant, deer, a hare, among others) are all hunted and somewhat endangered in their habitat. Here, they behave with almost human-like mannerisms in his sculptures, waiting patiently in a queue. 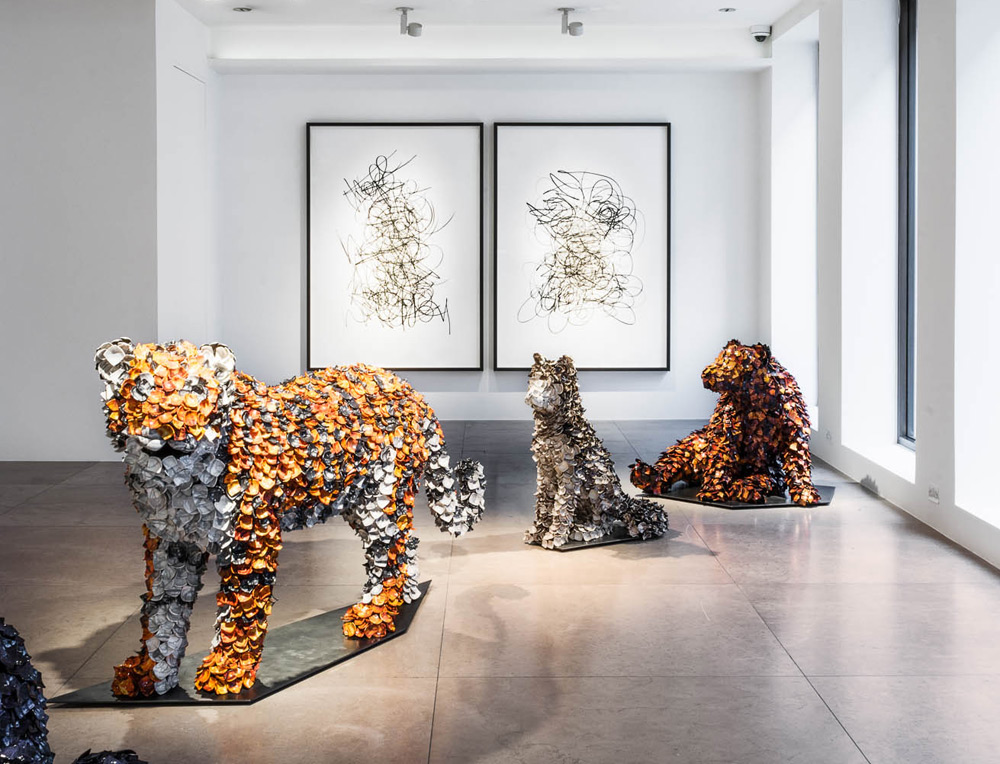 Installation view of ’Me Want Now’ at David Gill Gallery

A key to interpret this body of work is offered by the Word Drawings: Barford chose seven words, such as ’change’, ’glory’, and ’power’, which identify ideals to strive for in modern society. ‘They are virtuous words, that have driven humankind to do great things,’ says the artist. But they can easily become warped when repeated incessantly, or exasperated through political propaganda, he explains.

‘It feels that words have never been so important,’ adds Barford, ‘those written in the press, posted across social media and in speeches. In volatile times, words can be dangerous.’ His drawings are a portrait of this exasperation, repeating the words on paper until they overlap to become abstract images. The same patterns from the Word Drawings are reproduced on the ceramic pieces giving shapes to the sculptures.

Barford has spent a year working on this exhibition, during which time political and social developments have changed his perception of the works on display. ‘The political landscape has shifted massively,’ he says, ‘and the title "Me Want Now" took on new meaning.’ Barford’s exploration touches upon themes of dissatisfaction, selfish pursuit and its effects, a sort of ‘empathy fatigue’, as he calls it, which seems to be invading modern society. ‘Although I am influenced by current affairs and politics, I think the inspiration comes from looking at bigger subjects,’ he says. ‘I am using current affairs to explore these themes that are more abstract.’

Left, a queue of animal sculptures march in single file towards a life-size polar bear. Right, animal heads are mounted on mirror, allowing viewers to see the works from different perspectives

Large-scale frenzied Word Drawings embody ’the chaotic immediacy and almost forceful nature of the "me first" culture’, says the gallery

Installation view of ’Me Want Now’ at David Gill Gallery

’Me Want Now’ is on view until 21 December. For more information, visit the David Gill Gallery website