’Mathematics: The Winton Gallery’ is the world’s only permanent public exhibition designed by Zaha Hadid Architects

A new gallery designed by Zaha Hadid Architects, ’Mathematics: The Winton Gallery’, has opened at London’s Science Museum. Inspired by aerodynamics – with the revolutionary Handley Page ‘Gugnunc’ aeroplane soaring through its midst – the gallery architecture descends down onto the displays, its swooping voluminous curves wrapping up the objects into a convincing case history on how mathematics is the pivot of our human world.

The architects worked with curator David Rooney to design the gallery around 100 artefacts selected from the science, technology, engineering and mathematics collections. A symmetrical pod-like structure made of fabric with a frame of powder-coated aluminium engulfs existing columns in the gallery, creating a central seating area and folding itself around display cases all lit by a soft and unearthly glow, which fades from yellow to pink to light purple. 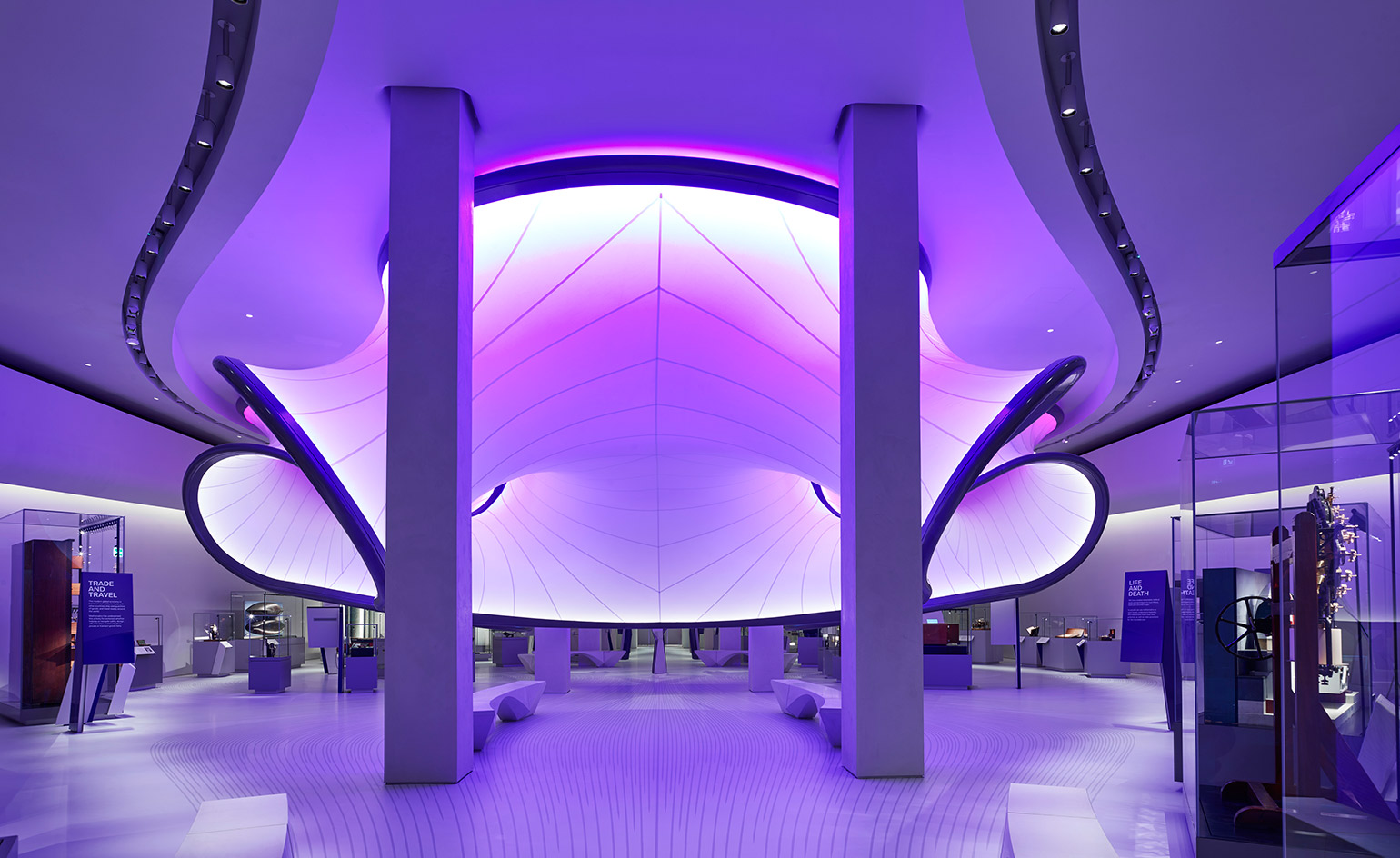 An interior view of the gallery

The form follows the flow of air that would have swirled around the Gugnunc, which was built in 1929 in Britain – then the safest aeroplane for human travel, playing a crucial role in opening up accessible aviation to the world.

Other tools enveloped in the architecture include a 17th century Islamic astrolabe and Wisard pattern-recognition machine – an early artificial intelligence device. Both help us understand how maths has been intertwined into the human experience over the past four centuries, from travel to astronomy to psychology – enhancing our lives and predicting our future while slowly counting the days and years until we die. 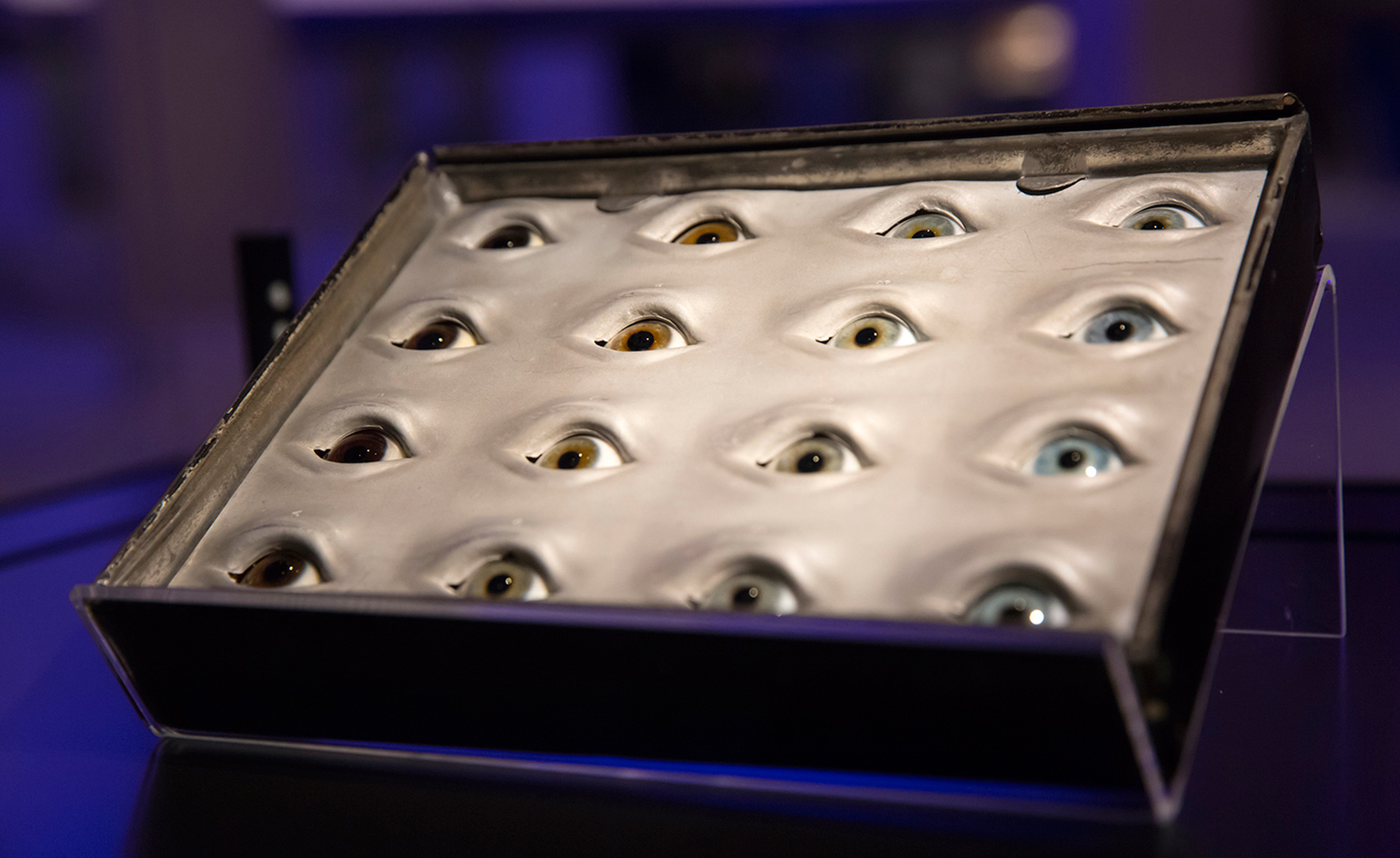 A box of glass eyes used by Francis Galton in his 1884 Anthropometric Laboratory, where he devleoped his theories in eugenics

The architects used computational fluid dynamics to translate the equations of airflow into the shapes of the forms, and robotic manufacture was used to produce the curved benches. Mathematics was a subject that was significant to the late Dame Zaha Hadid, who studied it at university, experimenting with geometry both technically and creatively.

Presenting maths in a new, almost alien, light, ’Mathematics: The Winton Gallery’ is the world’s only permanent public exhibition designed by Zaha Hadid Architects. Thanks to principal support from philanthropists David and Claudia Harding, as well as sponsors Samsung and MathWorks, the gallery is free for all to visit.

The gallery presents 100 artefacts from the museum’s science, technology, engineering and mathematics collections

The exhibition has been curated by David Rooney, who recently authored Mathematics: How It Shaped Our World to accompany the new opening

The range of objects in the gallery spans classical architecture to furniture design to an early example of the code-breaking Enigma machine. Pictured, Shizuo Ishiguro’s Electronic North Sea Model, 1960

This symmetric pod-like structure is a solid form of the air that would have flowed around the Handley Page ‘Gugnunc’ aeroplane, built in 1929