A chimp off the old block: artist Lisa Roet monkeys around in Beijing

The Opposite House hosts an unlikely guest this October, as artist Lisa Roet’s giant inflatable monkey swings into town to coincide with Beijing Design Week

If there is one way to attract attention on Beijing’s frenetic streets, placing a giant 14 metre-tall golden monkey inflatable sculpture on the façade of the Kengo Kuma-designed The Opposite House, one of the most iconic hotels in the capital, is certainly the way to go about it. Although undoubtedly whimsical, the work by Australian artist Lisa Roet, delivers a serious message about global warming and habitat loss affecting the rare golden sneezing snub-nosed monkey native to the forested China-Myanmar border.

The species, whose flat nose is uniquely adapted to its icy climate, was recently discovered after local villagers heard it sneezing, caused by melting ice. ‘The installation includes the sound of intermittent sneezes, which are quite cute and helps draw people in who are intrigued by the sight of a monkey climbing up the side of the hotel,’ says Roet. ‘It doesn’t just appeal to children, an old woman who has a cat on a lead comes every day to sit and look at the monkey and many people on the street stop to stare at it.  This is what I hoped it would do.’ 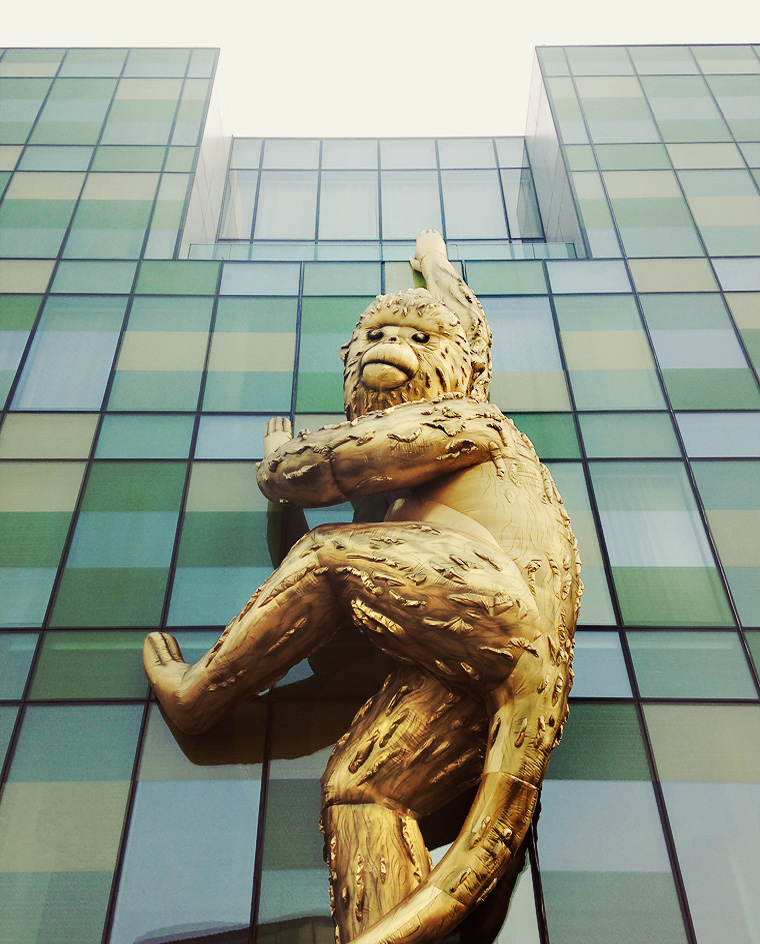 Made in Melbourne, the hand-stitched inflatable sculpture comprises a fine lightweight metallic material that looks like gold metal. The hotel’s dappled emerald green glass façade offered the perfect urban forest background, says Roet. ‘It is such a stunning building and the façade reminds me of the colours of Borneo. The urban habitat also underlies the message of monkeys being forced out of their natural habitat.’

Roet’s primate-inspired work extends inside with a showing of her innovative intricate jewellery inspired by primate features taken from cast renderings and rubbings from museums around the world.

The installation is on view until 30 October. For more information, visit the Opposite House website