Auratic and avant-garde, Jean-Michel Othoniel is one of the most intriguing names on France’s contemporary art scene. From filling an abandoned boat with tears to installing glass dancers in Versailles’ Water Grove Theatre, his aesthetic transforms galleries, public spaces and historic sites alike. Now, Othoniel is preparing to preview for Wallpaper.com one of his most ambitious projects yet: Le Trésor de la Cathédrale d’Angoulême, an immersive artwork nearly a decade in the making, recently opened to the public.

The sky is still dark when I arrive at Gare Montparnasse, where a photographer and I are to journey to Angoulême with Othoniel. With only a minute until departure, I clutch my coffee, worrying Othoniel is too late, but then there he is, crisply casual and cheerily upbeat for the ungodly hour.

With a rich history that dates back as far as the Roman era, one of the biggest jewels in Angoulême’s crown is the 12th-century cathedral. Between 1852 and 1875, French architect Paul Abadie – of the Sacré Coeur Basilica fame in Paris – restored the building in his signature neo-Romanesque style.

Fast-forward to 2008, when France’s Historic Monuments office, headed by Pierre Cazenave, put in motion a campaign to revisit the cathedral’s interior spaces and breathe new life into Abadie’s restorations. 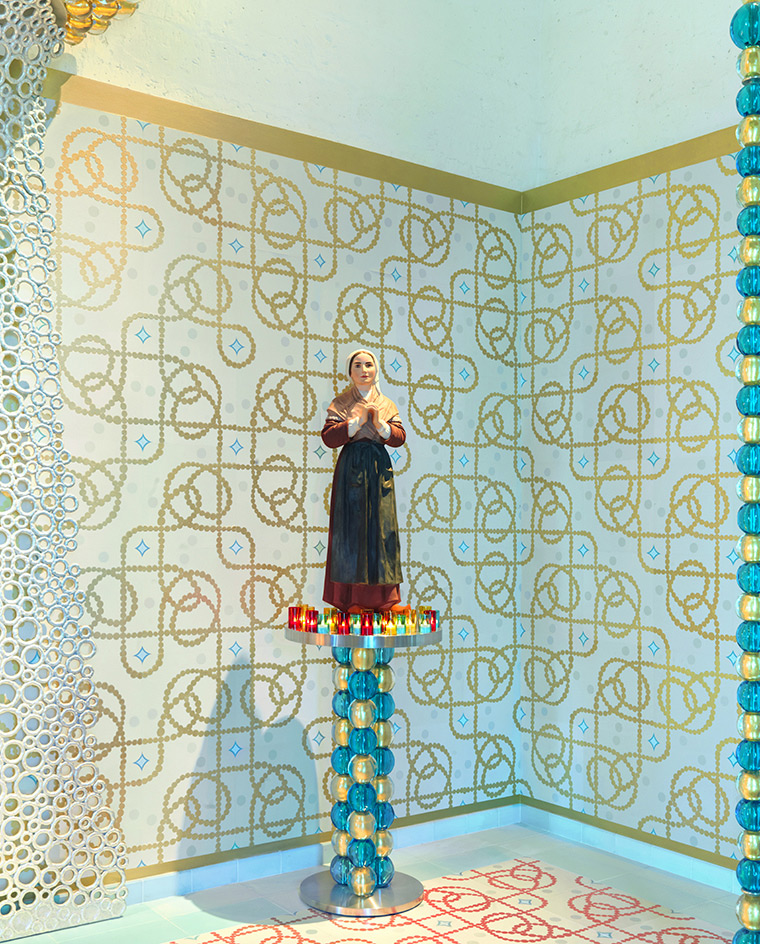 Working alongside France’s Ministry of Culture and Angoulême’s bishopric, Cazenave decided to commission a contemporary artist to create a new treasury to house 147 pieces, including statues and liturgical objects from the 1800s. Experienced in creating architectural and site-specific artworks for historical locations, Othoniel was a natural choice to take on the project.

We arrive at Cathédrale Saint-Pierre, bells tolling and all. Othoniel brightens at the sight of its facade, depicting the teachings of the Ascension and Last Judgement, which was also restored by Abadie. ‘Like the English Gothic Revival, the Roman period was in fashion in 19th-century France – it was a fantasy, people were dreaming about it – but the 19th century was actually the beginning of modernity,’ he says. Inside, he points out features that inspired his work, from cement floor tiles to stained-glass windows.

‘I wanted to make my designs spectacular but not use rich materials, because the period was about facade and fake objects,’ he says, gesturing to a newly painted plaster statue of St Bernadette. ‘The challenge was to show the quality in things that were not appreciated.’

Othoniel unlocks a heavy wooden door to reveal the first station of Le Trésor, which spans three rooms adjoining the cathedral. Previously a boxy storeroom, this space is now airy and light, complete with large stained-glass windows designed by the artist. A unifying feature throughout the site, these windows depict a sky sprinkled with stars, overlaid with a geometric motif that echoes patterns found on the cathedral’s tiling.

‘They frame the landscape like a painting,’ explains Othoniel. ‘With them I wanted to create a new blue – the blue of Angoulême.’ The first room, walls painted cool lilac, contains a crystal chandelier, wooden chapel chairs and an ornate plasterwork relief. Like the rest of Le Trésor, the space is unfinished at the time of our visit, with areas of restoration still needed and objects yet to be displayed. It will eventually house a lapidary, Roman fragments, and a Madonna and child statue.

Given that Othoniel describes himself as ‘not particularly religious’, I wonder how he approached a commission so steeped in the spiritual. ‘I was interested in the idea of the sacred,’ he replies. ‘This project pushed my ideas of wonder and magic, making a connection between beauty and the radical.’

Up a spiral stone staircase, the second station is revealed, themed around the ritualistic figure of the priest.

Here, ceremonial clothing and object will be housed in glass cases on rows of black glass beads. Fans of Othoniel’s work will recognise his use of hand-blown glass globes made by the same Murano artisans that collaborated on his beaded sculptures, such as Rivière Blanche and Les Lacets Bleus. 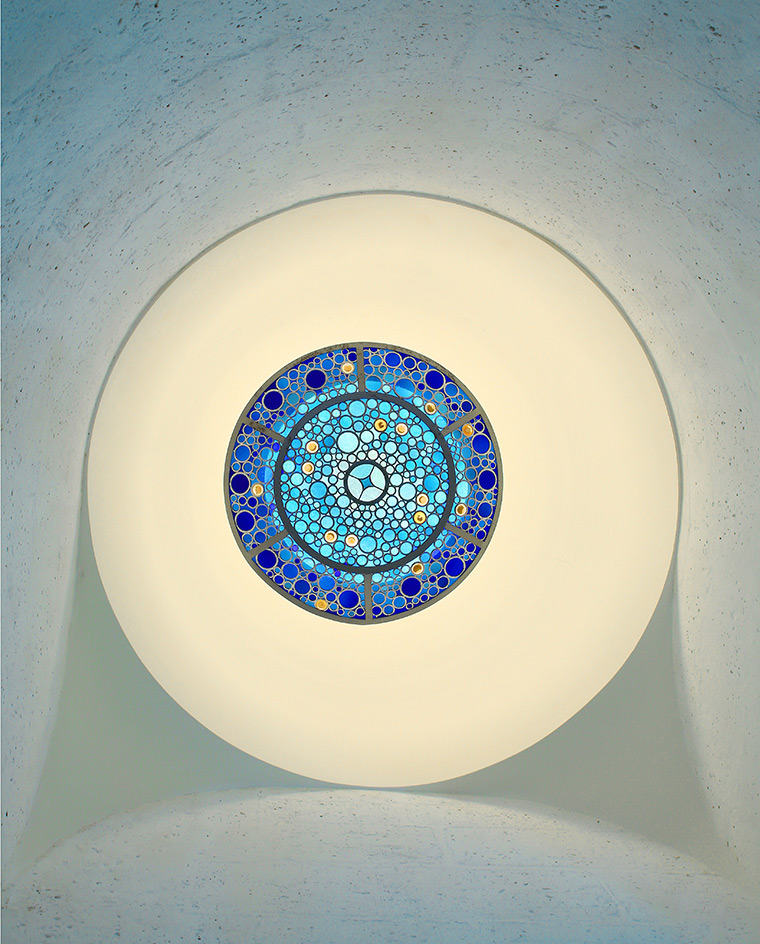 ‘This project was a real celebration of craft,’ he says. ‘It required a lot of different dialogues, and I worked with more than ten artisans after we first took time to feel and rebuild the space.’ Other examples of the workmanship can be seen in the final station, from the geometric wallpaper and tiles – mirroring the motif on the windows – to the glass vitrines to hold cathedral treasures. More glass beads, tinted blue (symbolising the Virgin’s mantle) and gold (the colour of Christ), support the furniture. A monumental window is the real show-stopper, formed of 10,000 chunks of glass and framed with hundreds of handmade cast aluminium rings, which, I am told, were nearly four years in the making. Rising from the ashes of the cathedral’s bombed-out bell tower, this last room has been transformed into a transcendent space suffused with natural light, illuminating saintly sculptures, religious artefacts and gilded objects.

The space is a masterpiece – but surely one that wasn’t without its challenges. ‘It’s the longest and most complex project I have worked on,’ he says. ‘But I love building a new destination in contemporary art.’ Like his Les Belles Danses, frozen forever in the Sun King’s gardens, Le Trésor is a permanent addition to the cathedral, bringing together past and present to mark a new stage of its history.

‘Yes, exactly! An artist is part of history. I am not an artist of fracture – I am one of continuity,’ he enthuses, face lit blue and gold in the light of a window. ‘Maybe, in 200 years, someone can rewrite my period.’