The facade is veiled by 360km of thin stainless steel pipe, which wraps around the superstructure of the buildinhg and is set above a Kalzip metal skin. Photography: courtesy of Snøhetta

Rising up from the eastern deserts of Saudi Arabia like an ancient rock formation, the King Abdulaziz Center for World Culture is an ambitious piece of place-making. Nearly a decade in creation, this vast complex has been designed by Norwegian firm Snøhetta to serve as a crossroads for many cultures, a geological form rendered in concrete and stainless steel.

Won in competition back in 2007, the building has been on site since 2008, during which time the brief has evolved and expanded. ‘When it’s finished in the spring, there will be an auditorium and theatre space for around 500, as well as a great hall, education centre, cinema and library,’ says Snøhetta’s Tae Young Yoon, the architect overseeing the project. The client is the country’s national oil firm, Saudi Aramco, believed to be the world’s most valuable company. Aramco’s headquarters in Dhahran, in the Eastern Province, is where Saudi Arabia’s massive petrochemical industry began back in the 1930s. Today, the city is a mixed landscape of nondescript glass towers, industrial parks, quasi-vernacular structures and huge residential complexes, surrounded by unrelenting desert to the west. 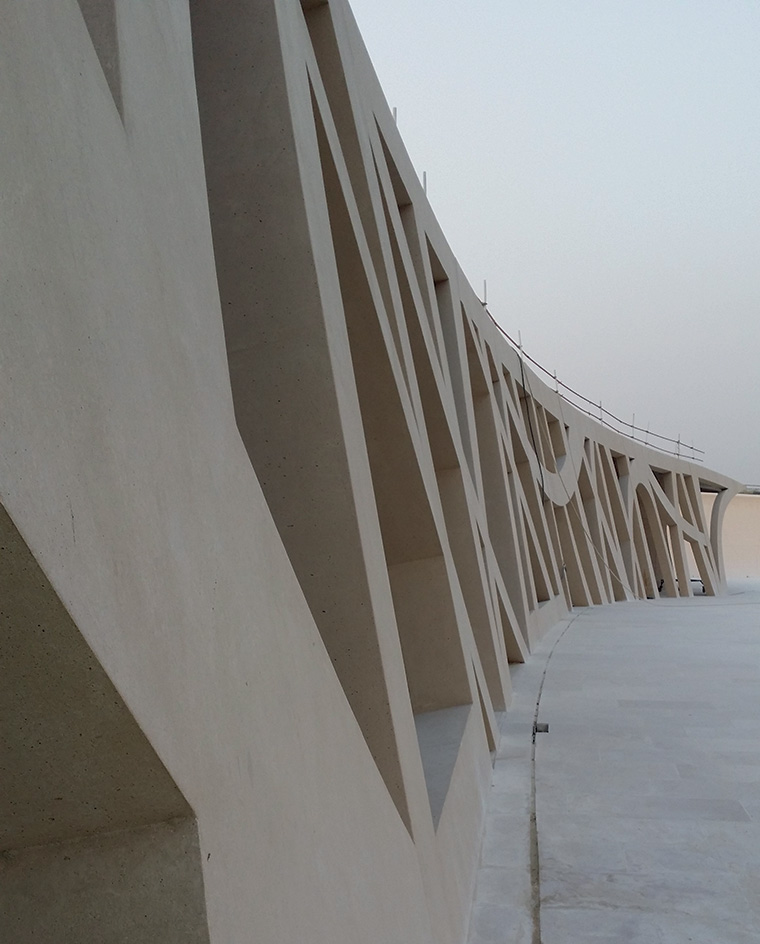 Geometric forms shape the interface between building and landscape

The Center for World Culture is the new focal point for a long-running programme of cultural relations and exchanges, a sort of gateway between the traditional culture of Saudi Arabia itself and the more globalised culture of the Dhahran compounds. ‘The wonderful thing about this project is that the client has stayed ambitious all this time,’ says Yoon, and the (nearly) finished building is testament to a steely resolve to create a good, old-fashioned architectural icon, albeit one that is rich with symbolism and history.

The centre is broken up into five ‘pebbles’, smooth, shiny objects that glisten in the sun and appear mysterious and monumental on the horizon. A 98m tower is the dominant heart of the composition, with a smaller ‘keystone’ to one side and three lower, sleeker structures rising up out of the desert. ‘The tower is an educational building. Each floor has a different function,’ says Yoon. ‘The keystone is intended to be the heart of the learning experience, a maker space with studios and equipment. In architecture, the keystone is the element that holds theweight of the arch. Here, it’s a keystone for learning.’ A large oval window, an ‘eye to the future’, looks down on the central plaza.

The five pebbles are arranged around this open space, which symbolises the coming together of past, present and future. Aramco chose the location for its close proximity to Dhahran’s ‘Prosperity Well’, the original site of oil export production that set the kingdom on the path to regional dominance. That past is honoured in basement displays and a small museum; the shape of the tower, with its criss-crossing bands of glazing, evokes the sight of an oil derrick rising up above the desert, which is itself symbolised by the smooth surfaces of the pebbles.

The ground level represents the present, while the education tower naturally points to the future. Engineered by BuroHappold, the 80,000 sq m complex makes use of a variety of materials, including stainless steel finishes, concrete, Corten steel and rammed earth construction. ‘The richer palettes are on the interiors,’ says Yoon, explaining how the library has an inner skin of identical steel panels. ‘They are five-sided forms with a double curvature, designed to overlap,’ he continues. ‘There is a set of parameters, but it was ultimately down to the installers as to how to actually arrange them.’

The auditorium uses Kvadrat-covered acoustic fabric panels with specially commissioned patterns by Norwegian textile artist Heidi Winge Strøm. The great hall has chandeliers designed by Snøhetta in collaboration with Zumtobel, while other interior forms use Hi-Macs, a manufactured acrylic stone that can be fashioned into almost any shape. 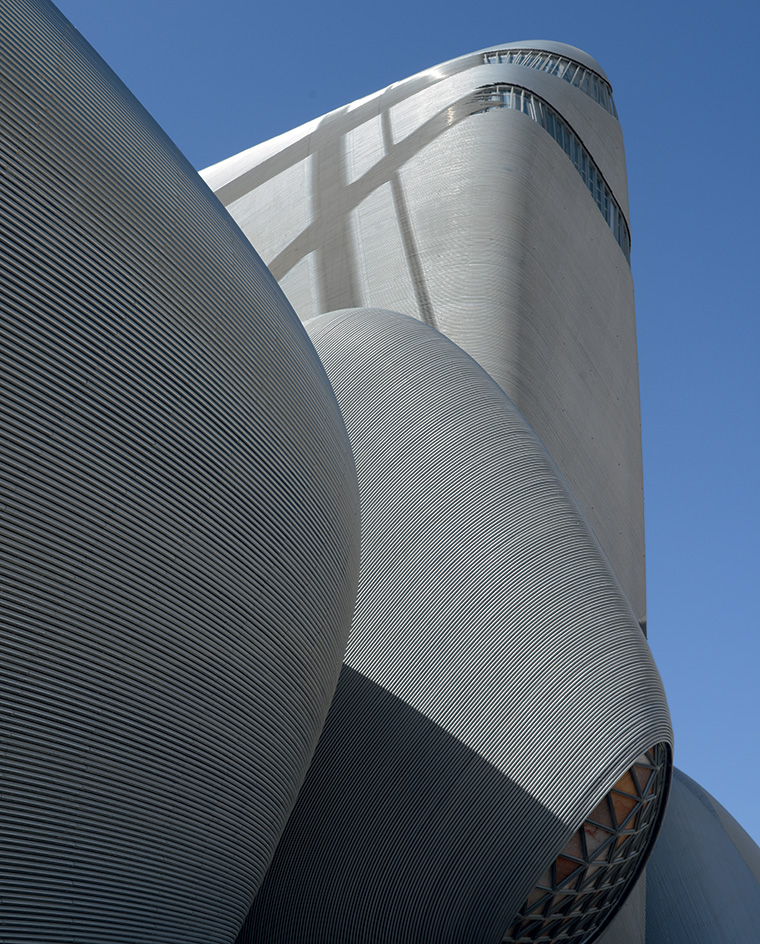 Most visible of all is the facade’s ‘veil’, made up of approximately 360km of thin stainless steel pipe wrapped around the centre’s superstructure, and set above a Kalzip metal skin. ‘In the original competition entry we had these stone forms with mirrored finishes,’ Yoon says. ‘As we developed it, we worked out a system of cladding the pebbles in lines of steel that could move around in spirals, emphasising their forms. It’s a form of dimensionally free cladding that’s also very robust.’ Compressing to thin blades as they oversail the windows beneath, the pipes also provide internal shade from the sun – essential in this extremely hot, humid and windy location.

Built by Saudi Oger with a large army of expat construction workers – a common practice here – the centre sits in an elegant swathe of landscape. ‘We have several “districts” in the landscaping, a series of garden spaces inspired by dry areas from all over the world, as well as space dedicated to Saudi Arabia’s own geological history,’ says Yoon. The building will be unlike anything else in the region – a magnet for visitors and the country’s most progressive piece of contemporary architecture.

‘It’s a truly international project, one that brings people together from very different cultures,’ adds Yoon. ‘They are coming here to interact and I’d like to think everyone has ownership when it’s finished.’

The centre is formed from five structural elements, known as ’pebbles’, and is dominated by the 98m ’Knowledge Tower’