A stitch in time: Mark Barrow and Sarah Parke’s woven works look to the cosmos

Earlier this month the husband-and-wife artist duo of Mark Barrow and Sarah Parke unveiled their latest multimedia project, ’Matter of Time’, at Independent Régence in Brussels. ’The show began by thinking about the laborious nature of our process,’ says Barrow, a painter, who has been known to meticulously stipple the canvases his textile-maker wife weaves from plain and coloured Belgian linen. For the Brussels exhibition they are showing a new selection of seven of their Reweaves, a suite of canvases which debuted last December at New York’s Elizabeth Dee Gallery and are created by staining plain linen, which is then dethreaded and rewoven into two paintings (one warp-derived; the other weft-derived) with completely new patterns.

’It is sort of a new model, I can’t think of any precedent in painting,’ says Barrow, noting two of the new paintings were shown reflected around a column, while another pair were shown on opposite walls from each other. ’It seems like it could relate to things like commingled particles – two particles that are linked, despite being separated by space/distance – or inflationary theory, a hypothesis as to why the universe is uniform, or that one point the universe rapidly expanded so disparate parts of the universe now are made up of the same stuff because they used to be close together.’

In addition to these labour- and conceptually-intensive works, the Queens-based couple has also created a new series of their Finger Paintings, featuring Barrow’s iPad strokes that follow the individual threads of Parke’s weavings. These comprise a site-specific installation with woven coloured films on the gallery’s massive skylight, and an accompanying animation based on imagery of a star that exploded over 20,000 years ago, and captured by the Hubble telescope in the early noughties. Barrow and Parke are also debuting a duet of canvases that mark an extrapolation of the Reweaves. Titled Phase I and Phase II, the new paint-free works are made from fabric that is woven, then cut into shapes and sewn together. 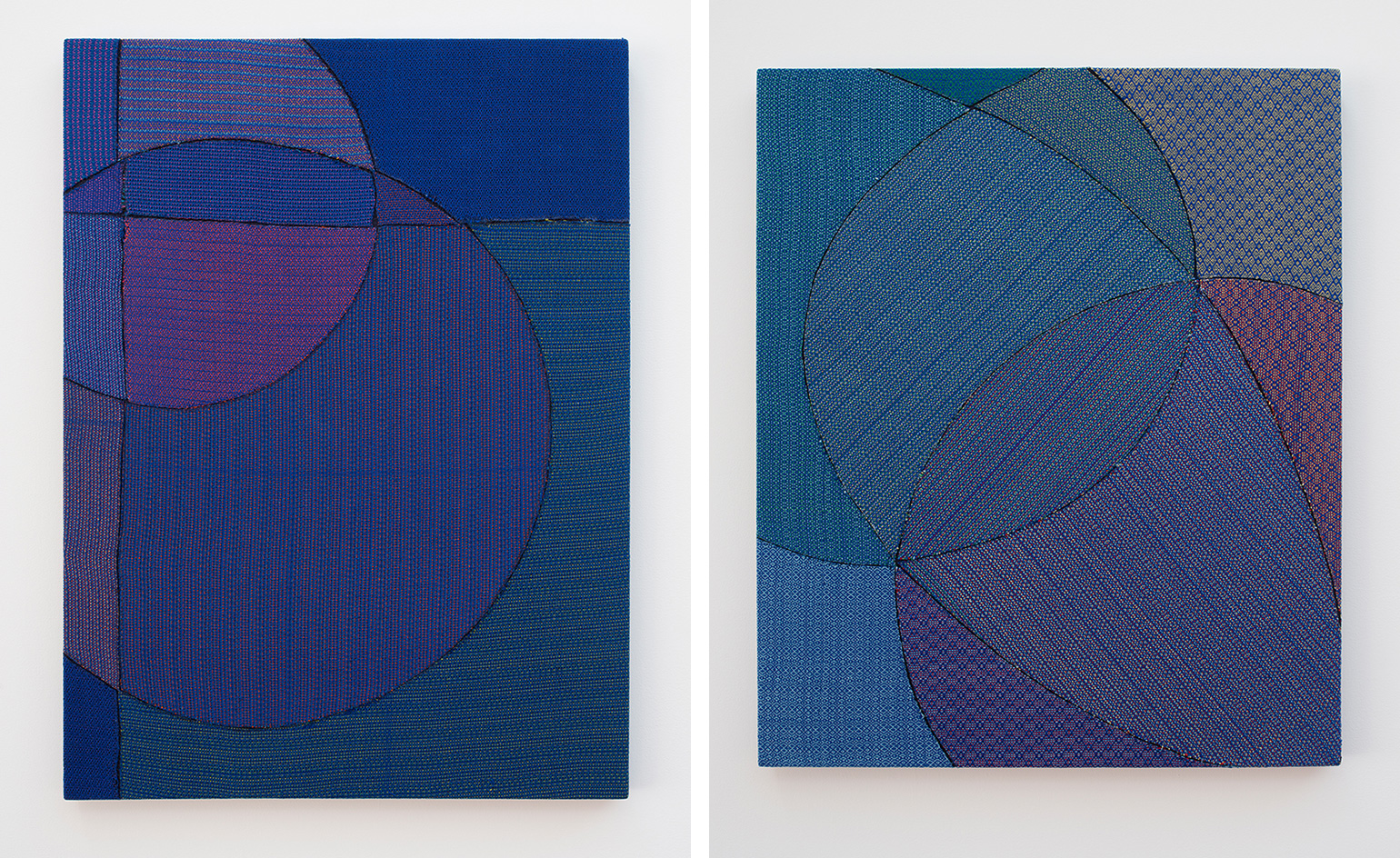 Phase I and Phase II (pictured), are paint-free works made from fabric that is woven, then cut into shapes and sewn together

’We had made some sewn paintings like this for our last show, but using only CMYK coloured thread,’ says Barrow of the ongoing series, which features a circular compositional motif. ’These don’t have that restriction. The compositions are meant to be reminiscent of planets or moons and are meant to draw attention to the difference between the works. How the circles change or move or seem to pass over each other from work to work.’

As for the Hubble imagery, or what Barrow calls ’a stand-in for the Big Bang’, the couple wasn’t sure when and where they started thinking about the exploding star – but the 12-second looping video of the explosion acts as a translation of sorts that measures ’the distance the light had to travel into pixels spreading across a screen – measuring time pictorially’, he says. ’This set up an interesting dichotomy with the paintings, which also literally count out my and Sarah’s time, thread by thread and brushstroke by brushstroke. So the exhibition consists of these objects that measure out time and is about both nothing and everything at the same time. Nothing in the sense that it is like busywork, just [the] counting of time. And everything in the sense that time is this construct which is how we relate to everything in a vast universe that is just moving along.’

Meanwhile, the skylight installation is based on one of the frames from the video, freezing a single moment from the celestial explosion and rendering it in six-inch multi-coloured film squares. ’It’s interesting to think of the possibility of light from the actual event still reaching us and filtering through skylight,’ says Barrow. ’Also to think about the coloured light refracting off things and this pixelated image being put back into the universe and floating around the ether somewhere. The window piece was also fortunate [in] that it was on a large window that was above you when you walked into the gallery. So it served as a nice intermediary between the actual sky and the video. If you can imagine this cosmic event being funneled down and ending up on a tiny iPad on the wall.’

Taken from the 12-second animation, the gallery’s skylight installation freezes a single moment from a celestial explosion and renders it in six-inch multi-coloured film squares

’The show began by thinking about the laborious nature of our process,’ says Barrow, a painter, who has been known to meticulously stipple the canvases his textile-maker wife weaves from Belgian linens

For the Brussels exhibition they are showing a new selection of seven of their Reweaves (pictured), which debuted last December at New York’s Elizabeth Dee Gallery

A selection of the show’s Reweaves

The Queens-based couple has also created a new series of their Finger Paintings, featuring Barrow’s iPad strokes that follow the individual threads of Parke’s weavings

’Mark Barrow: Matter of Time’ is on view until 22 October. For more information, visit the Independent Régence website