From 2001: A Space Odyssey to The Shining, the unique cinematic world of Stanley Kubrick

Next month sees the opening (26 April 2019) of the eagerly awaited Stanley Kubrick retrospective at London’s Design Museum. The exhibition will offer an authoritative study of the director’s unique approach to design and film-making and will feature over 500 objects, costumes, film projections and ephemera from ground-breaking titles such as A Clockwork Orange, Dr. Strangelove and Full Metal Jacket 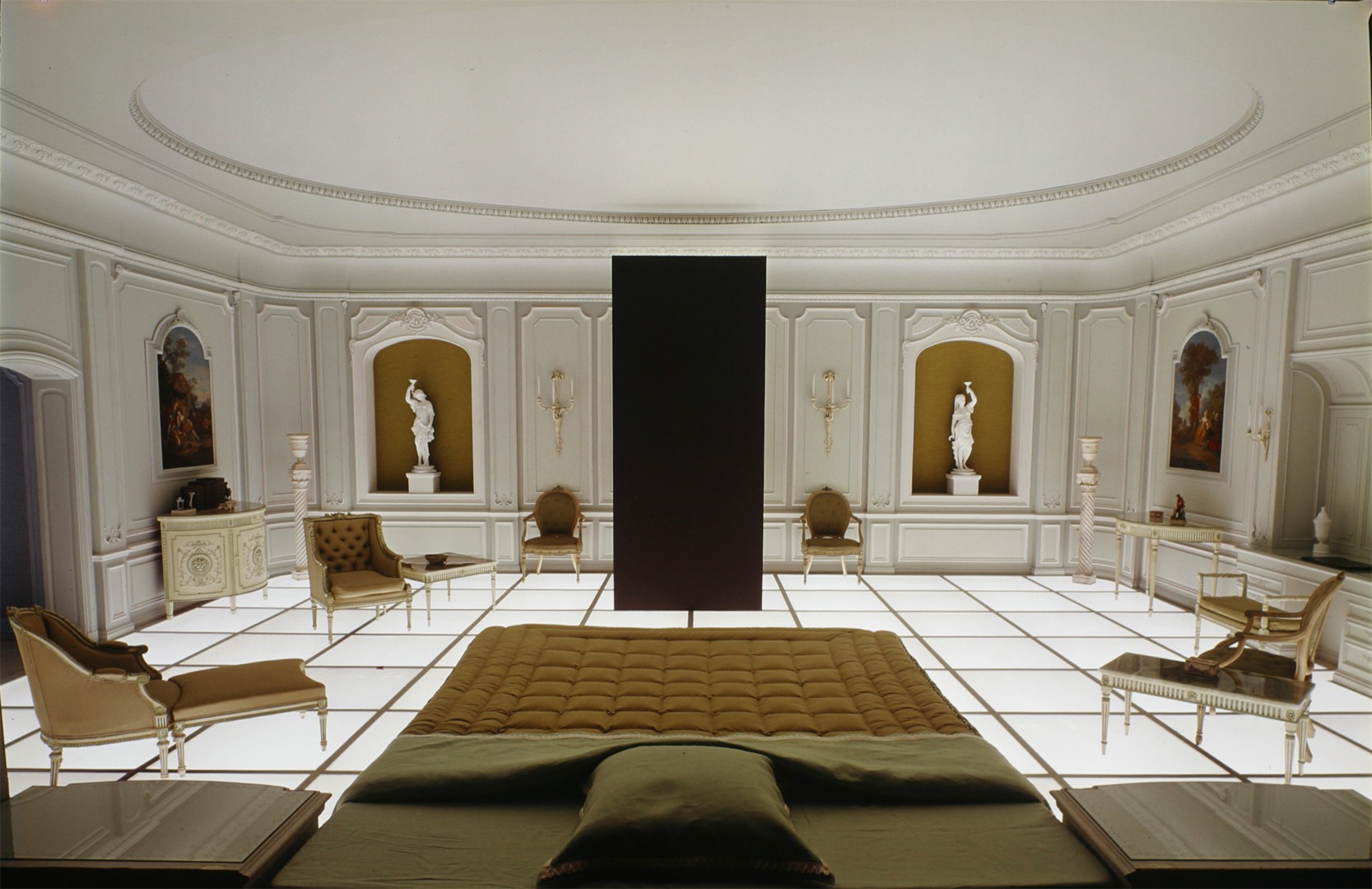 Like Orson Welles and Alfred Hitchcock before him, Kubrick worked across film genres to produce masterpieces of science fiction, horror and costume drama, using stylistic references taken from pop art, brutalist architecture and 18th-century portrait painting. His directorial style famously centred around a ‘one point perspective’, symmetrically framed compositions that visually draw the audience into the screen to create unique cinematic experiences.

Kubrick’s command of the camera frame is most apparent in 2001: A Space Odyssey, an intricately staged production that features no dialogue for over two-thirds of its near three-hour running time. Shot in 1968, the year before the moon landings, the film slowly orbits towards a dream-like conclusion that mixes hyper futuristic interiors with Renaissance works of art and Louis XVI style furniture, an aesthetic later mimicked in the 1990s by Phillipe Starck at the Hudson Hotel Bar in New York, recreating also Kubrick’s iconic illuminated grid flooring.

Born in New York in 1928, by the late 1940s Kubrick was working as a staff photographer for Look magazine, completing over 300 assignments that documented life on the streets of cities across the USA. These formative observational experiences would shape his understanding of the growing social and political anxieties of post-war American society, unfolding amidst an urban infrastructure that was expanding at pace. These anxieties were to be placed centre stage in all Kubrick’s productions, manipulated and projected through the remarkable architectural spaces he created or utilised for every film. As a result, the architecture and interiors of Kubrick’s films are as important to the narrative as the central characters. The endless corridors of the Overlook Hotel in The Shining, the embryonic interior of HAL computer in 2001 and the vast concrete war room in Dr. Strangelove are all embodiments of the psychological condition of the people living or working within them. To create such scenarios, Kubrick accumulated volumes of research on potential locations, or gathered references that could be interpreted within the production design of each film. 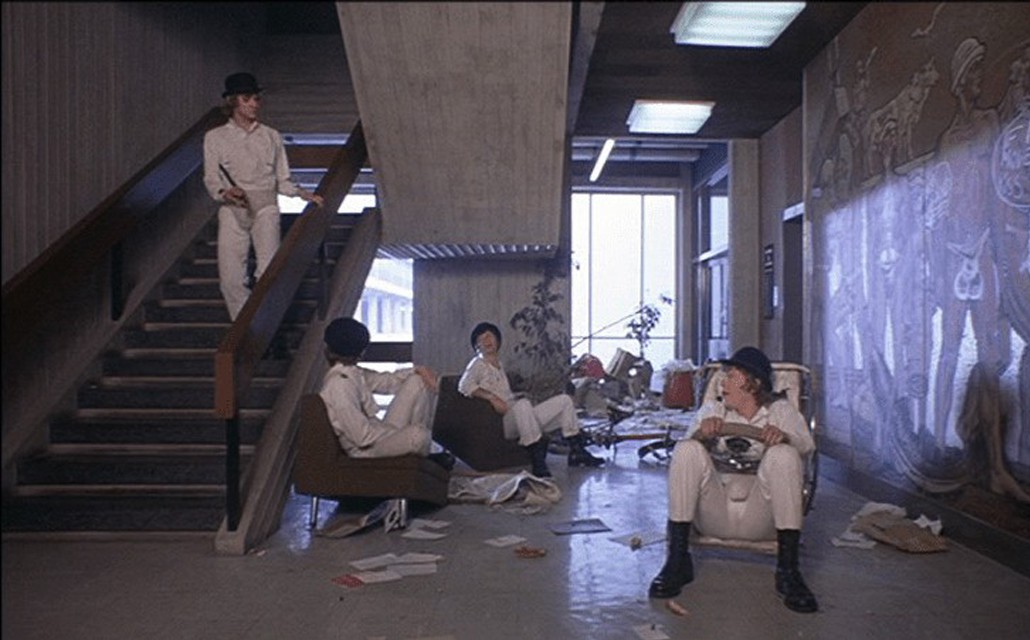 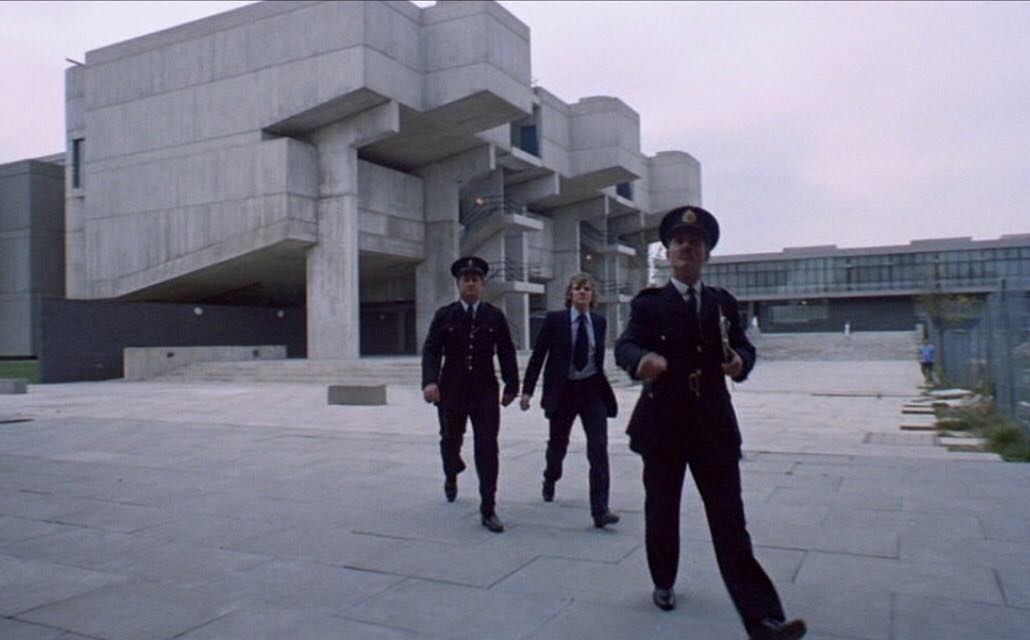 For the near-future London setting of 1971’s A Clockwork Orange, Kubrick trawled through architectural publications to find an aesthetic that could feel suitably different to the status quo. His survey of contemporary British architecture yielded the Skybreak House, built in 1967 by Team 4, Norman Foster and Richard Rogers’ first architecture practice, and Richard Sheppard and John Stillman’s brutalist Lecture Centre at Brunel University, completed in 1968, to use as key locations within the production.

Kubrick’s intention was to use the bold architectural language of these new buildings to stylise an alternative London, familiar yet devoid of the more obvious visual signs such as red buses or tourist landmarks. Today, the most memorable location in the film is the Thamesmead Estate, then one of the largest housing projects under construction in Europe, and selected by Kubrick for the utopian optimism it projected, notwithstanding the violence of Anthony Burgess’ novella on the which the film was based. 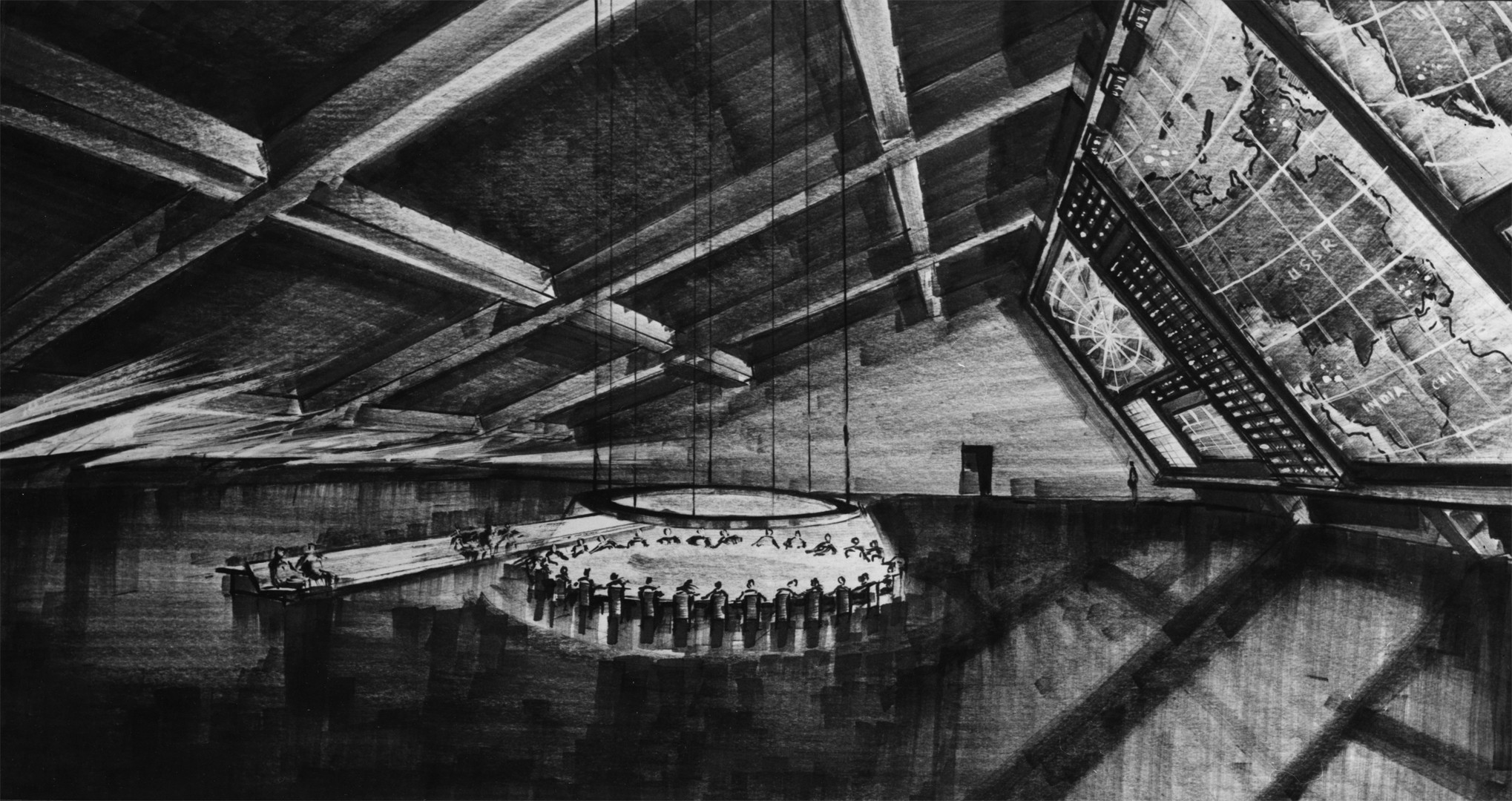 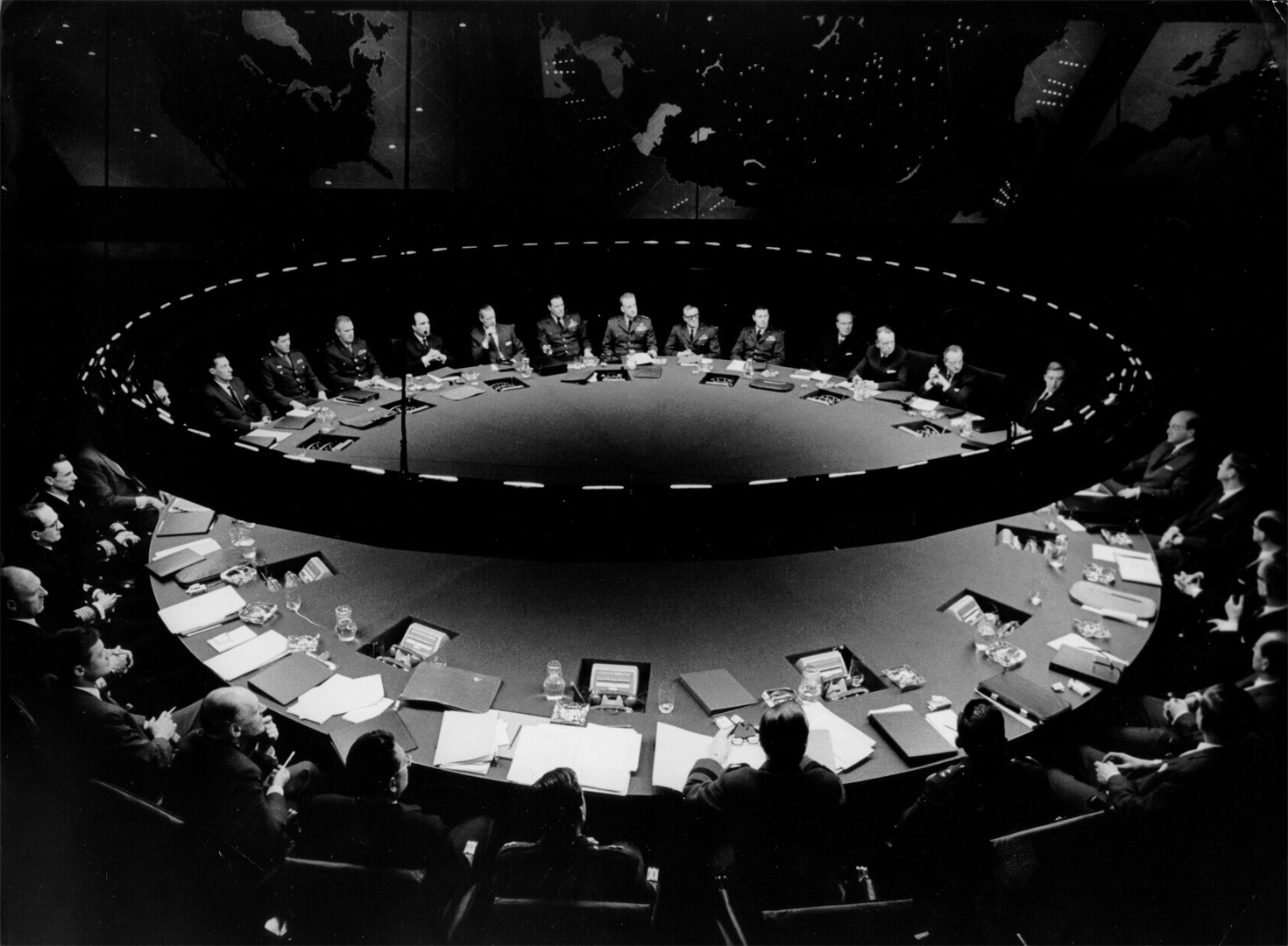 In sharp contrast to the brutalist aesthetic of A Clockwork Orange, also seen in the vast underground war room of his earlier Dr. Strangelove, Kubrick used the society portraits of Thomas Gainsborough and Joshua Reynolds to create a reference board for the Georgian era setting of Barry Lyndon. The paintings helped the director and his production designer, Ken Adam, and costume designer Milena Canonero, to understand fashion and posture of society at that time, and to study how the painters framed their compositions within the plush domesticity of Georgian stately homes. In order to film in ‘authentic’ candlelight, Kubrick purchased three camera lenses used by NASA to take pictures of the moon, enabling him to shoot a number of night time sequences. 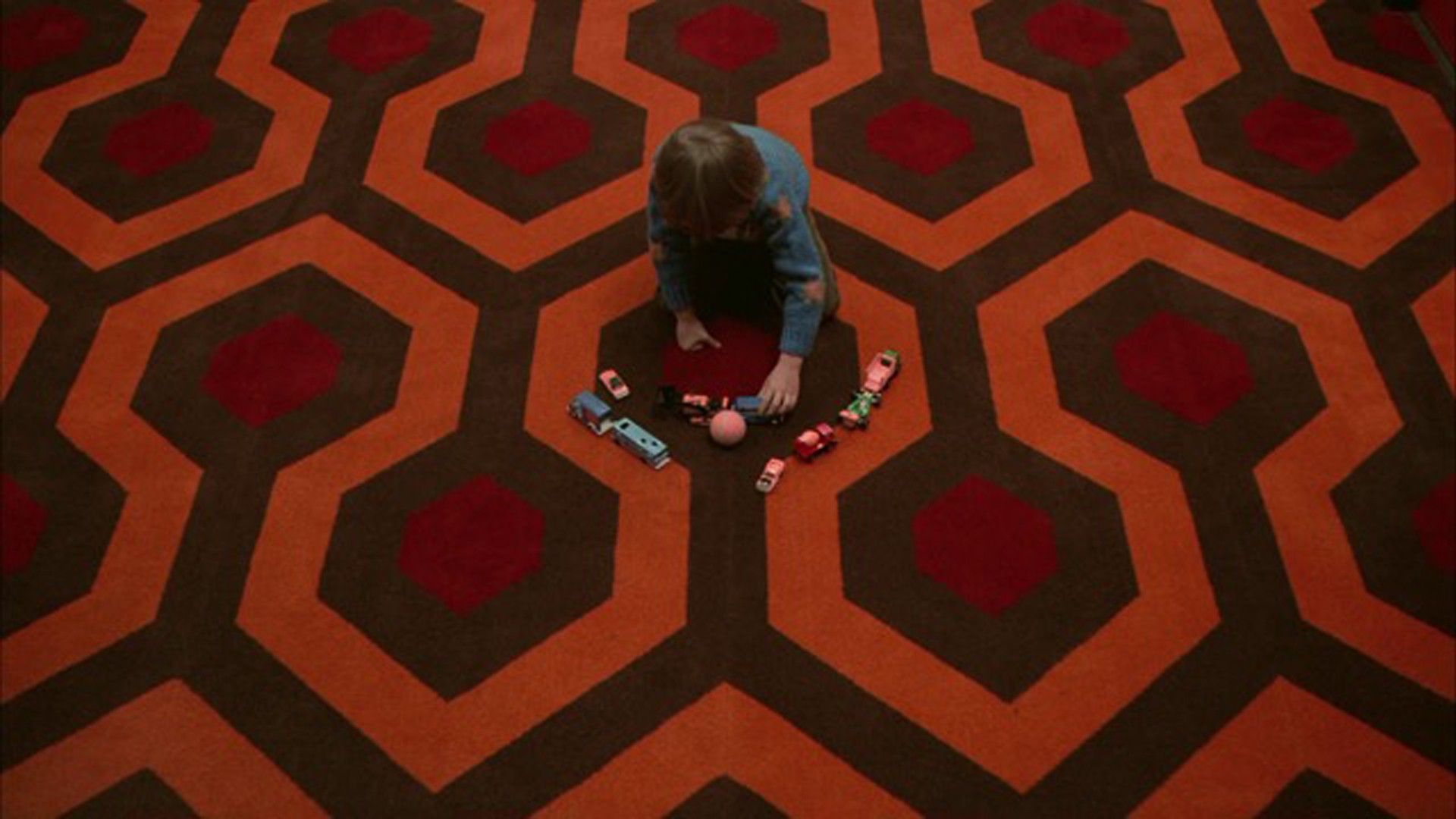 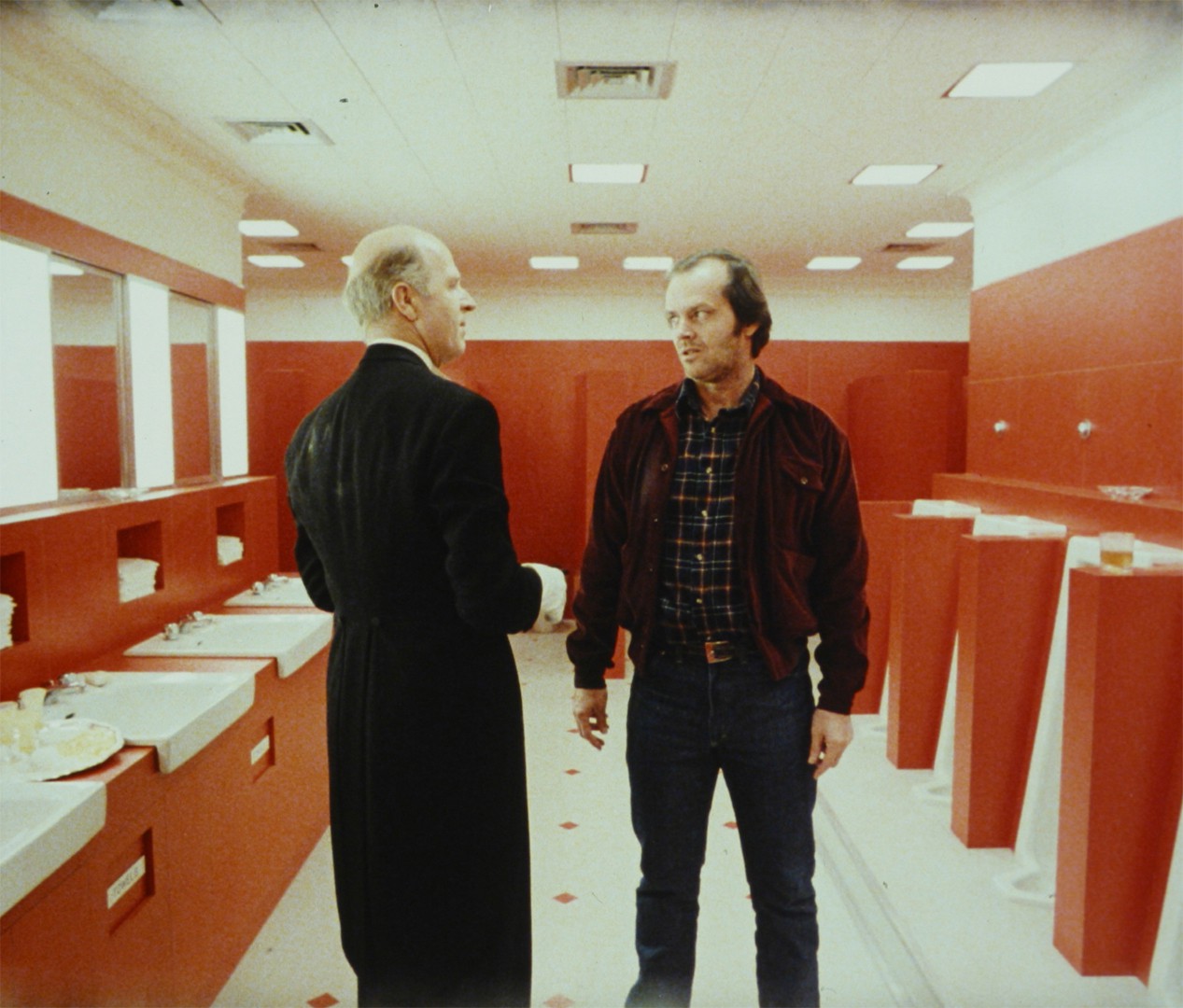 Kubrick’s architectural masterpiece is perhaps The Shining’s rambling Overlook Hotel, built as a complete stage-set at the Elstree Studios in England, and today one of the most recognisable interiors in cinema history.  The distinctive bold orange, brown and red hexagon pattern carpet that runs through it masterfully heightens the claustrophobia and growing sense of dread that lurks within the seemingly deserted corridors. The carpet was designed for commercial production by David Hicks, one of the 1960s most prolific interior designers, and who later decorated the Prince of Wales’ first apartment at Buckingham Palace.

Many of the objects and production materials on display in the Design Museum exhibition have been loaned by the Stanley Kubrick Archive at the University of the Arts London, created following a bequest by the director’s family following his death in 1999. At his home and offices at Childwickbury Manor in Hertfordshire, Kubrick amassed volumes of research sources, photographs, historical documents and biographies, all meticulously catalogued and filed in custom-made boxes, produced by a local stationery company to his exact specifications.

The sheer volume of material the archive contains demonstrates Kubrick’s obsession with research and his need for total historical or factual accuracy. During pre-production for his last film, Eyes Wide Shut, he sent researchers to Greenwich Village in New York to photograph and measure entire streets, before recreating exact replicas back at Pinewood Studios in London. Such approaches yielded elaborate and expensive stage-sets that often went over production budgets and shooting schedules, yet resulted in one of the greatest bodies of work in 20th-century cinema. Visitors to the Design Museum will be offered a unique chance to learn more about the perfectionist who created it. §